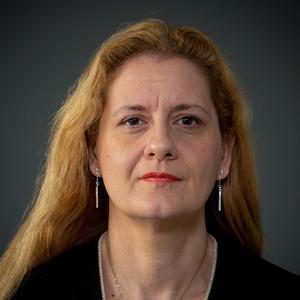 Dr Anastasia Deligiaouri  (or Deligkiaouri) is currently a Senior Researcher and a Policy Analyst at the school of Communications and the Institute of Future Media and Journalism. She is working on the Science Foundation of Ireland project on the COVID-19 Public On Line Forum (choosingourfuture.ie) . Anastasia from August 2018-November 2020 was a Marie Curie Experienced Research Fellow in a project funded by the European Commission at the School of Communications at Dublin City University in Ireland. The project entitled PEREDEP aspired to provide a deliberative feature in law making in the EU. She has served as an (Adjunct) Assistant Professor at the Department of Digital Media and Communication of the University of Western Macedonia  located in Kastoria, Greece from 2008 to 2018.  During the summer of 2010 she was invited as a Visiting Research Fellow at the Centre for the Study of Democracy at the University of Westminster in London, UK where she conducted research on models of democracy. She was awarded her PhD in Political Science with specialization in Political Communication with Distinction, in 2007. During her PhD studies she was awarded a scholarship for her research from the State Scholarships Foundation of Greece (IKY). She has participated in many international conferences and workshops and she has published in International Journals and Edited Volumes on political communication issues, E-Politics and political discourse. She is associate editor at the International Journal of E-Politics and she serves as a reviewer in other international journals as well. Her monograph entitled “Political Discourse and Television: Politics, Ideology and Mass Media” was published in 2012 in Greek
Tweets by DCU