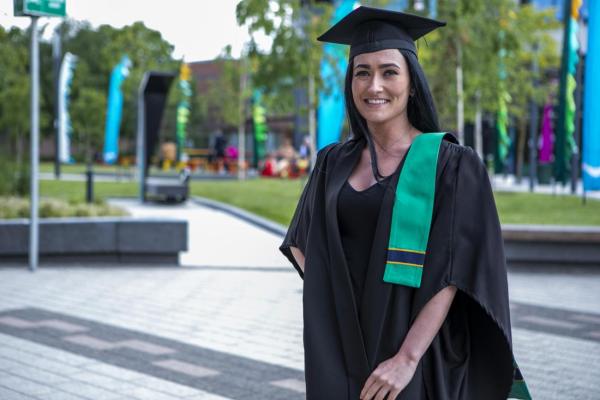 Julie Duke returned to education as a mature student, and says her DCU course 'was the making of me and helped me in more ways than one'.

Julie is proud of her Traveller heritage. She was nervous about going to third level, particularly as she had left education when she was 14 years old.

She expected that being a Traveller, “I will stick out like a sore thumb. The biggest eye opener for me was the acceptance that I got. I was a DCU student. I was there to learn and there was no difference between me or any other student doing the course.”

Julie completed her Certificate in Peer Support working in Mental Health and says of her classmates, “they were all very accepting and friendly people and very understanding. That got rid of some of my anxiety and we all supported each other on the course.”

“I made some really good friends through the course and we are still in contact.”

Her journey before going to DCU included leaving secondary school at 14 and marrying when she was 16. She had her daughter when she was 17.

Her marriage broke down and Julie and her daughter went to live with her parents.

She availed of supports and completed a number of courses before deciding to return to education.

“I always wanted to do something but my confidence and lack of knowledge was a barrier.  When I found out about the DCU course and because I had mental health problems, I found it really interesting.”

Among the general entry requirements for the year-long course is that the students have a previous history of mental health problems and that they are in recovery or recovered.

The application process involved Julie sharing her mental health history. She also researched the state of mental health in the Traveller community and “found out how high the suicide rates were.”

“I have a close friend who supported me throughout my recovery and in making the application to DCU. I spoke to her about how I could work with my own community around mental health and be a support to them if I did this course.”

Her other motivation to do the course was “my daughter. I wanted her to see that she does not have to get married at a young age and if she did choose to get married, she could also have an education.”

Part of Julie’s journey to DCU involved having to tell her family that she wanted to return to education.

She says they were worried for her and whether she would be safe or would be judged. She also risked being judged by her community.

“It took courage to stand my ground in what I wanted to do. I was going to change and offer my daughter a better life if I could get work out of it and be able to support her.”

The night before she started she said, “I never slept due to anxiety. I was up bright and early the next morning. I had never been on a third level campus before.”

She said going to DCU “impacted my life in a very positive way. It gave me an unbelievable amount of confidence and independence which is a great thing to have as a woman in the Travelling community.”

“I have my own independence, I am my own person and I learnt how to use my own voice. It has made me want to learn more in education and realise how important education is.“

Julie is the first person in her extended family to go to college and said, “the course was the making of me and helped me in more ways than one.”

Julie, who is from Cavan town works for the HSE as a peer worker for the Travelling community “supporting members of my own community who have mental health challenges."