‘Has the state really retreated from direct regulatory interventions in higher education in exchange for ‘steering from a distance’- or is the emperor only changing his clothes?’

This was the central question posed on 3 October by Professor Dirk Van Damme, Head of the Centre for Educational Research and Innovation (CERI) of OECD in his lecture Governing Higher Education: the limits of public regulation and institutional autonomy in a connected world. This event was the sixth in a lecture series hosted by the Higher Education Research Centre (HERC) DCU, with support from the Higher Education Authority (HEA) and the Dublin Region Higher Education Alliance (DRHEA). The welcome address and introduction was given by Professor Brian MacCraith, President of DCU and the lecture was followed by discussion chaired by Professor Maria Slowey, Director of Higher Education Research and Development, DCU, with inputs from Tom Boland, Chief Executive of the HEA, Professor Shirley Walters, Director of the Division for Lifelong Learning, University of Western Cape, South Africa and participants drawn from the policy community, researchers and higher education leaders. 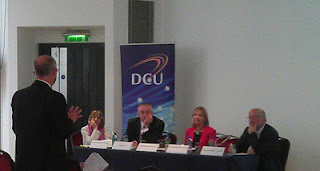 Working out the balance between state regulation and institutional autonomy is an important topic internationally for universities and other higher education institutions. The debate is particularly lively just now when higher education is going through a period of major reforms (including the Bologna Process, EU’s Lisbon Agenda, EU2020, and the EC’s modernisation policy). It can be argued that, on one hand, universities are social institutions supported to a significant extent by public funds and therefore, should be accountable. But on the other hand, universities have a number of distinctive missions which require a high degree of autonomy from the state. Speaking of the general trends in the state policy developments internationally, Professor Van Damme drew attention to a series of new policy instruments-output funding, quality assurance, accreditation and accountability- are more likely to increase state regulatory intervention in higher education research and innovation policies. This is primarily evidenced by initiation of reforms on performance-oriented funding, increased competition and introduction of accreditation processes.

Why have public policies in higher education remained so strong and interventionist? The reasons in his view are that higher education remains a public policy field precisely because the stakes are so high ‘that no government is willing to allow universities to depart from public policy objectives which are seen as crucial for a nation’s future prosperity and progress. Effective and equitable systems of knowledge production, knowledge transfer and knowledge distribution are key to societies’ progress’. But also, Professor Van Damme continued, it is essential that universities continue to use the opportunity for autonomy in effective and productive ways. He further identified some of the areas where institutional autonomy could be more strongly exercised: academic staff policies, human resource, research priority setting and programme and curriculum development. Highlighting the profound consequences of state regulation on higher education research agenda, government and leadership, Dirk Van Damme spoke of the need to increase an institutional ‘connectedness’, to develop strong strategic leadership and vision and developed the concept of ‘network governance ‘.

Professor Van Damme is currently Head of CERI (Centre for Educational Research and Innovation) in the Directorate for Education at the OECD in Paris, where he is also responsible for the Teaching and Learning International Survey (TALIS). He holds a PhD degree in educational sciences from Ghent University and has been professor of educational sciences in the same university (since 1995). He has been professionally involved in educational policy development in a range of senior roles at European and national levels including, deputy director of the cabinet of the Flemish Minister of Education.