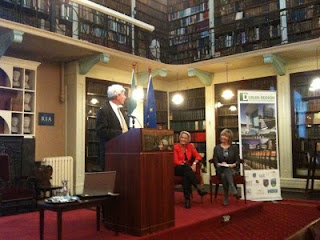 Dr McCarthy, previously Professor and Pro-Vice Chancellor (Equality) at Auckland University, commenced with reference to the long and proud history of tertiary education in New Zealand. Since the establishment of the first university just about 140 years ago, the universities became key contributors to New Zealand’s social and economic well-being. But numerous changes are taking place in this small island state, including: the search for more business investment, the need for available research funding to be used more effectively, support for fundamental research, increasing international connections and settling new priorities for higher education. In the course of her lecture, Di McCarthy explained how the need for prioritisation and adaptation of innovative strategies and policies in regard to R&D in higher education was gradually triggered by a number of factors. She highlighted, in particular, low business investment in R&D, an overly complex system, poor connection across science and innovation, gaps in important infrastructure and the loss of talented researchers.

More specifically, Di McCarthy described new systems of organising research funding, which maintained an important role for the Royal Society of NZ as a channel for funding basic research across all disciplines.

The event attracted wide interest with up to 70 representatives from civil society, researchers and those engaged in policy and practice in higher education. The discussion drew parallels and differences with Ireland and centred around the questions “How might greater collaboration or merger  of institutions change things? What are the best mechanisms of allocating funding to maintain a competitive element yet reduce bureaucracy? What does success look like in terms of economic measurement of outputs of research? How to ensure that research investment is not distorted by the search for narrow, short-term indicators” and many more.

Concluding the event, Di McCarthy stressed that the ideas and creativity are at the core of knowledge creation, cultural innovation, social well-being and economic and technological development. The expectations of research are high and there is a need for encouraging more integration into interdisciplinary research locally and worldwide.