Why do English-speaking countries – including Ireland, England and Northern Ireland – do relatively poorly on international comparisons of adult skills? A symposium of senior academics and practitioners from across the UK and Ireland, held in Dublin on 22 May 2014, set out to answer this question and find ways to boost opportunities in their countries. The symposium, “How to tackle intergenerational equity gaps in knowledge and skills?” was convened and chaired by Professor Maria Slowey, Director of HERC (Higher Education Research Centre) and offered an opportunity to locate Ireland in a wider international context. 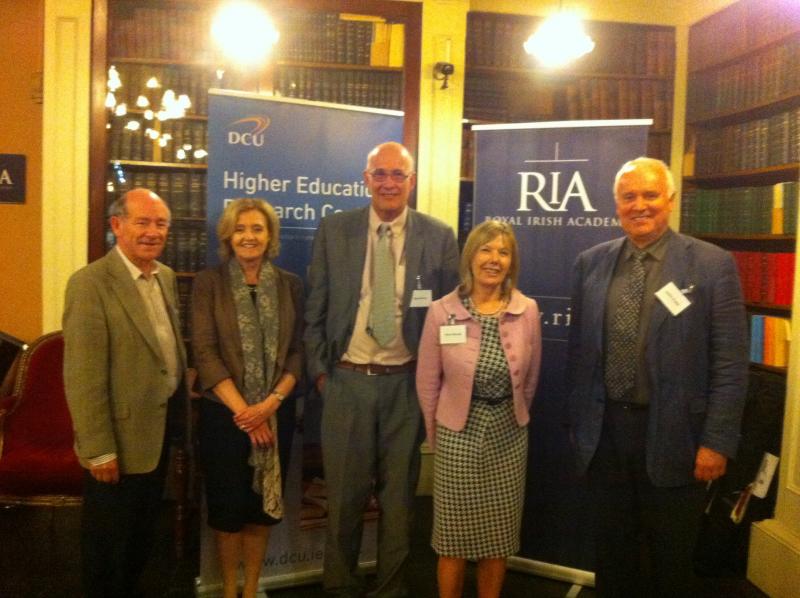 The results of OECD’s PIAAC (Programme for International Assessment of Adult Competencies) study – which assesses the skills of more than 160,000 people in 24 countries in literacy, numeracy and problem-solving – was the key focus for discussion. The event was hosted by the Higher Education Research Centre (HERC) Dublin City University in association with the Royal Irish Academy and the Centre for Learning and Life Chances (LLAKES) Institute of Education, University of London. And brought together researchers and policy makers with a shared interest in enhancing adult skills.

Keynote Address: The keynote speech was given by Professor Andy Green, Director of the LLAKES Centre, who said social class background was still exerting a powerful influence on the skills of England’s adults. He led a study showing that the gulf between the highest and lowest achievers in literacy and numeracy is exceptionally large. The gap is widest for young adults. Along with the US, England has the widest gap for this age group of all the 24 countries recently surveyed by the OECD. For all working-age adults In England, the difference in numeracy scores is wider than in all but two countries (France and the US). Northern Ireland’s skills gap is almost as wide as England’s, Professor Green found.

Professor Green’s analysis of the OECD evidence and other skills surveys shows that in England there is a particularly strong relationship between adults’ skills and their parents’ education levels. The education system itself has produced “exceptionally unequal skills outcomes” going back to the 1950s, which have been exacerbated by “an especially strong influence from social background” on children’s choices and opportunities, he told the symposium. “This is the primary cause of the relatively high inequality in adult skills in England today”. He said: “These findings matter, because skills have well-known effects on labour market and wider social outcomes. Over the last quarter century the UK as a whole has experienced one of the fastest increases in wage inequality in the developed world.” However, his analysis suggests that high quality vocational education can help to mitigate inequality. He told the symposium that dual systems – such as Germany’s highly-respected approach involving both in-company training and education at vocational schools – can help reduce the inequality deriving from the education system at age 15. In addition, countries where there is high participation in vocational education and training also tend to have more equal skills distribution ­– though there are other contributing factors. “It’s a Herculean task to bring down educational inequality when economic inequality is increasing internationally,” he said. 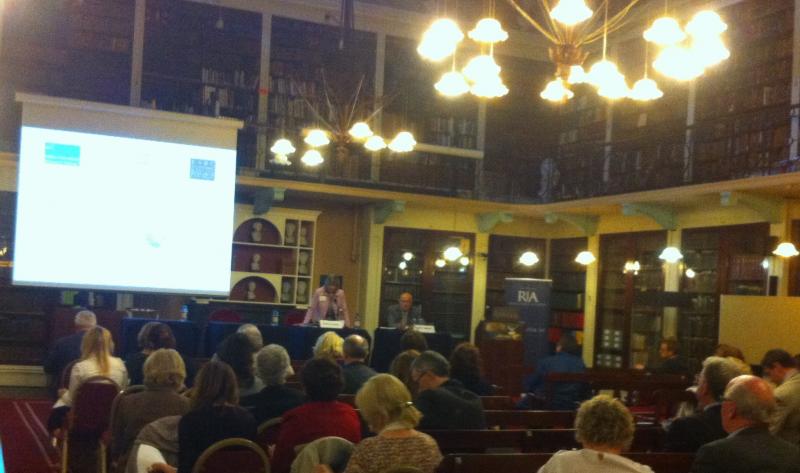 Panel Presentations: Speakers from both the Irish Republic and Northern Ireland said that, unlike England, where young adults score no better than older people, 16 to 24-year-olds; basic skills surpassed those of people aged 55-65

Professor Maria Slowey, director of HERC, said: “The relatively poor results for adults in Ireland point to the need to find ways to widen access to education and training across all levels, and at all stages of life – a ‘second chance’ for many who never enjoyed a ‘first chance’.” Donal Kelly, from the Republic of Ireland’s Central Statistics Office, gave a presentation on the PIAAC results for Ireland indicating that adults aged 16-24 perform 20 points higher on literacy than adults aged 55-65, with 12.9% of 16-24 year olds found at the lowest levels of literacy compared to 27.8% of 55- to 65-year-olds. Studies continue to show that early school-leavers are most likely to perform at low levels – but today just 6% of those aged 16-24 are in this category, compared with almost half of 55- 65-year-olds. In his presentation, Victor Dukelow, joint head of analytical services for the Department for Employment and Learning in Northern Ireland, said that a comparison of the results of the International Adult Literacy Survey, conducted in 1996, and PIAAC, conducted 2011/12, shows that  literacy was improving. The proportion of the working population functioning at the lowest levels of literacy had fallen from 23% in 1996 to 18% in 2012. In addition, Northern Ireland was getting closer to the OECD average, although it still remained in the bottom half. The gap had reduced from 11 points (on a 500 point scale) in 1996 to 4 points in 2012, and it was improving at a good pace compared to other countries. Nevertheless, there is a clear recognition that much more progress is required if Northern Ireland is to match the best performing countries in these important skill areas.

Anne Ryan, Professor of Adult Education, National University of Ireland, Maynooth, emphasized the importance of adopting a wider approach to adult learning, beyond a narrow skills agenda. Meanwhile, John Field, Emeritus Professor of Lifelong Learning at Stirling University, told the symposium that Scotland lacks the information it needs to boost adults' skills and job prospects because the country decided not to take part in the PIAAC study. “Not only do we lack a firm evidence base for evaluating skills distribution and comparing it internationally; we are as a result missing from the international conversation over the lessons from the survey,” he said. Professor Field suggested it was a difficult time for those interested in improving adult skills in Scotland because the Scottish Government had focused its attention and money on full-time education, particularly higher education. “The two big losers from this focus are adult learners and people who want vocational education. We have seen a significant decline in numbers in both groups.” The number of part-time further education students in Scotland’s colleges fell by almost 200,000 in the five years up to 2012-13.

Fiona Hartley, Executive Director of An tSeirbhís Oideachais Leanúnaigh agus Scileanna (SOLAS), the Further Education and Training Authority in Ireland, provided a summary of the discussions, and suggested some directions in which the agenda could be moved forward. She stressed the importance of focusing on the needs and wishes of learners, which SOLAS has been mandated to do, and which is an approach that features strongly in the organisation’s five-year strategy. She noted the diversity of educational aims and ambitions that had been discussed during the course of the seminar, and considered that some shared agreement was necessary in determining the purpose of Further Education, Higher Education, and other forms of Education and Training, as to whether a distinct and defined role of Education as preparation for employment should be adopted, or whether broader conceptions of Education should also play pivotal roles in policy formation. Fiona took a message from the afternoon’s presentations to the effect that these goals are not mutually exclusive.

An implicit theme to the afternoon’s discussions, which was not often expressed directly, was that of the quality of educational experiences. Ireland takes pride in high completion rates at secondary level education; but several of the presentations had highlighted issues concerning underachievement and failure. International comparisons show considerable variations in the skills of individuals who have completed what are ostensibly the same levels of qualifications; so, for example, second level trainees in some Nordic countries are often equal or better in terms of skills attainment than people in the UK and Ireland with third level qualifications. This points to the need for more research and evidence in order to evaluate what is being done in education and training, and to what standards, particularly with regard to literacy and numeracy strategies, in which considerable investment has been made over the last two decades.

Another route for possible progress concerns the links between further and higher education, and the degrees of access and the barriers between the two sectors. The models of how FE/HE are structured could be looked at carefully to see how these systems are organized in different countries, and whether amendments could be made to provide more appropriate forms of delivery, with greater flexibility, in order to meet the needs of learners. She noted that in Germany, where large numbers of apprenticeships are available, the skills gap is far less than is the case in other countries. On the other hand, the data for England also suggests that apprenticeships there are quite numerous, but that the skills gap there is wider than in the German case; so that there appears to much still to understand about the nature of the processes which we are attempting to manipulate.

The discussion also pointed to the need to look at different models of workplace learning, particularly those which manage to avoid or reduce levels of skills deterioration. It is frequently in the context of the workplace that people are enabled to use the skills that they have learned, and to develop their skill levels still further. Questions relating to inter-generational skills differences, and particularly low levels of skills amongst young people, also require urgent attention. The evidence base between countries needs to be examined in order to determine the appropriate policy actions that might be taken in future. Future steps: the key issues identified in the seminar will be fed into relevant policy and research fora.