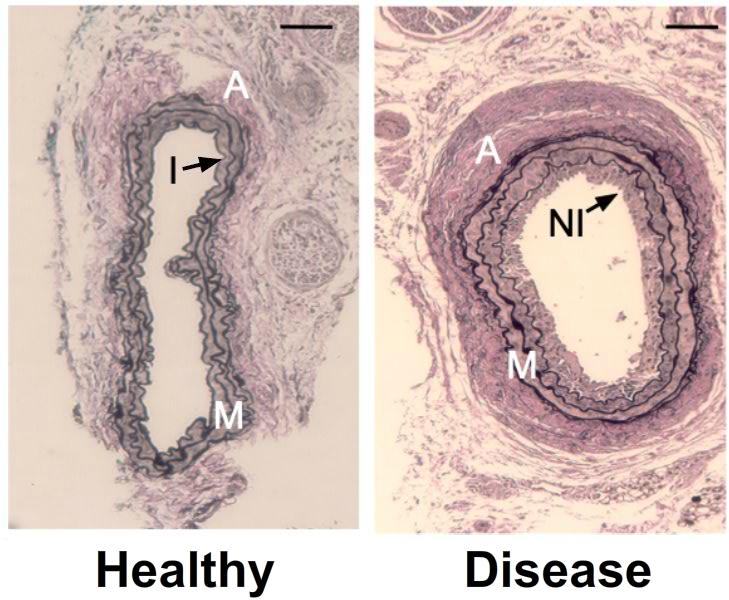 Cardiovascular disease is the leading cause of death and disability world-wide. A hallmark of these diseases are structural changes in the blood vessel wall, most notably, the progressive accumulation of smooth-muscle-like cells which leads to vessel wall thickening and the formation of lesions. Overtime, these lesions can develop into hardened plaque formations which ultimately impinge upon, or in some cases, completely obstruct blood flow, leading to events such as heart attacks or strokes.

Early detection of these lesions therefore represents an important therapeutic target, and researchers in the School of Biotechnology; in collaboration with colleagues in the Fraunhofer Project Centre for Embedded Bioanalytical Systems at DCU, Centre Nacional de Microelectronica, Barcelona, and University of Rochester Medical Centre, New York, have implemented a novel approach for screening cell populations within the vasculature towards understanding the cellular profile in these atheroprone regions and potentially devising a platform for early diagnosis. These novel data have just been published in the Springer Nature Journal, Stem Cell Reviews and Reports

‘Mammalian cells are known to contain molecules which become fluorescent when excited by ultraviolet or visible light of a particular wavelength’, explains Dr Claire Molony, first author on the publication. ‘Methods of detecting individual spectral profiles have greatly improved over the last decade to the point that we can now detect and identify the discrete spectral differences between individual cells’.

‘The most robust and widely utilised sources of autofluorescence in cells are those proteins related to metabolism and the structure of the cell itself. Work to date in other systems has shown that the light profiles, which contains the sum of all individual autofluorescence signals emanating from those target proteins, contain individual signatures which correlate with clinical assessments of normal, altered or disease states. This label-free single cell photonic measurement approach has led to the development of new medical diagnostic tools for various disease conditions’.

‘We used this technology to screen the various cell types that populate vascular lesions in atheroprone regions of the vessel wall, against those native in the healthy vasculature, in order to determine the cellular profile of lesions, based on their spectral profile. Using this spectral datasets, we could then devise and inform an artificial neural network based on their photonic profile which could then be used to interrogate vessels for the presence of the pathologic cell types. The outputs were then benchmarked against cell fate mapping data using transgenic mice’.

The Vascular Biology & Therapeutics Laboratory at Dublin City University has been researching the underlying biology that drives differentiation/de-differentiation of the various cell types pertinent to arteriosclerotic disease. Their observations on the phenotypic shift which leads resident vascular stem cells to undergo myogenic differentiation to a motile, synthetic partially differentiated SMC phenotype is what inspired the idea to investigate the potential of photonic profiling.

‘The changes in the structure of the vessel wall in atheroprone regions stems from changes in the phenotype of the key regenerative cells that reside there’, explains Prof. Paul Cahill, senior author on the publication. ‘For example, deposition of matrix proteins such as elastin and collagen upon which these cells grow and differentiate is markedly increased’

‘Cells isolated from lesions at atheroprone regions of the vessel wall had a photonic signature at particular wavelengths, which distinguished them from healthy counterparts. In separate experiments, cultured undifferentiated resident vascular stem cells isolated from the vessel wall have marked increases in their production of elastin and collagen following myogenic differentiation to SMC-like cells and exhibited similar photonic signatures to cells within the lesion’.

‘Based on these and other findings within this study, we have clearly demonstrated that single cell photonics from healthy and diseased vessels display significant differences in their specific autofluorescence emissions across a number of broadband light wavelengths. In fact, we identified a particular myogenic phenotype common throughout the lesions which pre-dispose an individual for the development of cardiovascular disease, a cell type which can be detected in a label-free manner’.

‘Moreover, our analysis using neural networks pre-trained with our spectral datasets showed machine learning could be successfully deployed to classify cells from normal and injured vessels, allowing detection of early-stage vascular changes in the vessel wall’.

‘We believe these findings may facilitate interventions and treatments to improve vascular function and reduce the morbidity associated with CVD’.

For more information, the article can be accessed here.