One of the prime candidates behind deadly vascular disease is a regenerative resident stem cell under the control of Hedgehog signalling proteins, according to researchers from the Vascular Biology & Therapeutics laboratories, School of Biotechnology, Dublin City University, who have used advanced gene-tracing methodologies to hunt down this culprit in a newly published article appearing this month in the journal Nature Regenerative Medicine. 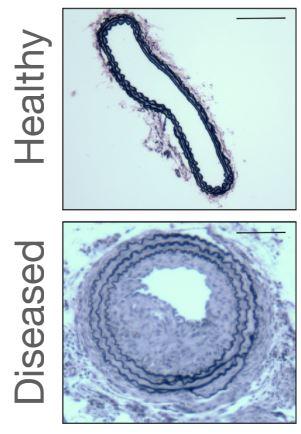 ‘For decades it was thought that mature smooth muscle cells within arteries become activated by known risk factors such as high blood pressure and cholesterol which over time stiffen and clog arteries’, describes Dr Mariana Di Luca, first author on the recently published article. ‘Blocked arteries can eventually lead to a heart attack and/or stroke; events that are responsible for one third of all deaths worldwide. However, resident vascular stem cells under the control of an important morphogenic protein named Hedgehog; previously implicated in genome wide association studies (GWAS) of vascular disease patients, are also involved in progressing the events which lead to acute events such as heart attacks. As such, these progenitor cells should be a focus in the search for new treatments’.

It is generally accepted that the formation of artery-blocking lesions stems from an initial stiffening of the vessel wall caused by risk factors such as high blood pressure and cholesterol that promotes the build-up of smooth muscle-like cells and the formation of a neointima within the vessel wall. This lesion has certain characteristics of smooth muscle, the dominant type of cell in the blood vessel wall. Further damage caused by low-density lipoproteins, the ‘bad’ cholesterol many people try to reduce in their diets, engages the body's immune system to attract legions of inflammatory white blood cells that spur the formation of fibrous scar tissue further obstructing the vessel wall and reducing blood flow. As mature smooth muscle cells no longer multiply and grow, it was thought that in the course of disease progression, they may revert, or de-differentiate, into an earlier state where they can proliferate and form matrices that contribute to plaque build-up.

However, in this new study, researchers in Dublin City University, working in collaboration with Assoc Prof Eileen Redmond’s group based in the University of Rochester Medical Centre, New York, used transgenic mice with a gene that caused their rare population of resident stem cells to express a red fluorescent protein that can be easily detected under a microscope, both in healthy vessels and after inducing disease. In analysing the cells from cross sections of stiffened arteries, they found that up to 60 percent of cells in lesions were red and therefore derived from their resident regenerative stem cell. In addition, if they blocked the morphogenic protein, hedgehog, they reduced the size and number of these cells within the lesion. Further analysis demonstrated that these stem cells were dormant under normal physiological conditions but when the artery was injured, the stem cells were activated and started to multiply.

‘By isolating and culturing these stem cells from mouse arteries, in addition to human versions of these cells generated by adapting human induced pluripotent stem cells (hiPSCs) in the lab, further experiments determined that the resident vascular stem cells are capable of differentiating into various specialised cell types, including smooth muscle-like cells under the control of Hedgehog, which could explain why previous studies identified these cells involved in blocked arteries as de-differentiated smooth muscle cells. Analysis of human arteries from healthy and diseased patients confirmed that similar types of vascular stem cells are indeed found in human blood vessels’

"We provide additional compelling evidence that vascular diseases are a kind of stem cell disease," said principal investigator Professor Paul Cahill, a vascular biologist and senior author of the publication at the School of Biotechnology, DCU. "This work should revolutionise therapies for vascular diseases because we now know that Hedgehog-responsive vascular stem cells are an important player in the context of vascular dynamics and represent a potential therapeutic target." The finding that a stem cell population contributes to artery-hardening diseases, such as arteriosclerosis and pulmonary hypertension, provides a promising new direction for future research, the study authors conclude. Specifically targeting stem cells in the vessel wall might be more effective than current treatments for vascular disease.

‘These new findings reveal a potentially important therapeutic target and should speed up the discovery of novel treatments for vascular diseases.

For more information, the article can be found here.