Single-use plastics currently present a significant environmental challenge to global sustainability goals. The Irish government has committed to a 51% reduction of the country’s greenhouse gas emissions by 2030, ultimately aiming for net-zero emissions by 2050. There are significant challenges associated in achieving this, and of particular interest to a number of researchers within the Faculty of Science and Health, is the burden imposed in the production of plastics, to which they have found an innovative solution.

‘It was recently estimated 29 million tonnes of plastic waste was collected in Europe in a single year, of which 32% was recycled, and the remaining 68% incinerated or sent to landfill’, describes Dr. Jennifer Gaughran, project lead on DCU’s Grain-4-Lab Project. ‘This represents a significant environmental burden which needs to be overcome in order for the EU to meet the aforementioned emissions goals’.

‘Society and industry have become increasingly reliant on the single-use plastics generated from fossil fuel sources which in themselves impart a significant emissions footprint. There are however opportunities for bioplastics; plastics made from renewable sources, to replace these. In doing so, we can significantly reduce the 13.4 million tonnes of carbon dioxide produced annually solely from plastic production, and effectively create a circular economy in which these bioplastics, after they’ve been used, could in themselves be used as resource to produce new bio-degradable plastics’.

‘We have devised a strategy that utilises a native waste stream from the food and drinks industry in Ireland towards generating a new kind of bio-degradable plastic. In doing so, we are effectively reducing the impact of two significant waste streams, and producing a renewable, sustainable alternative’. 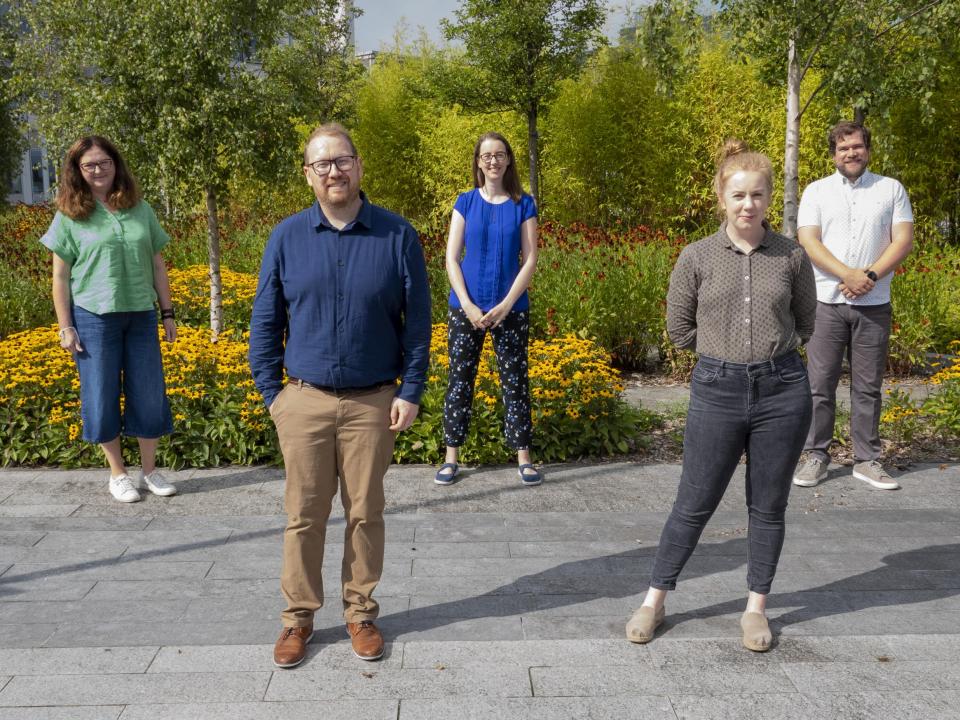 ‘Of the 29 million tonnes of plastic collected in the EU, nearly 6 million can be attributed to the life-science industry‘, describes Dr. Brian Freeland, co-lead on the Grain-4-Lab Project. ‘While there are on-going changes in the public and private sectors towards sustainability, replacing single-used plastics has always been a challenge’.

'Now in the seed phase, Grain-4-Lab are aiming to not only produce bioplastic labware that meets current ISO standards, but also evaluate adoption of these materials in both teaching and research laboratories in the coming months’.

The team were one of ten teams competing under the SFI Plastics Challenge. This call challenged researchers to devise solutions to current environmental challenges posed by plastics in society. Recently, the team and their proposal were successful in making the final shortlist of candidates eligible for a €2 million fund as part of the SFI Future Innovator Prize.

‘In the short-term we aim to produce a bioplastic that matches the performance of current plastics, but in the long-term we believe approaches like ours will reduce plastic waste in labs and other sectors, with significant environmental and health benefits for everyone’.