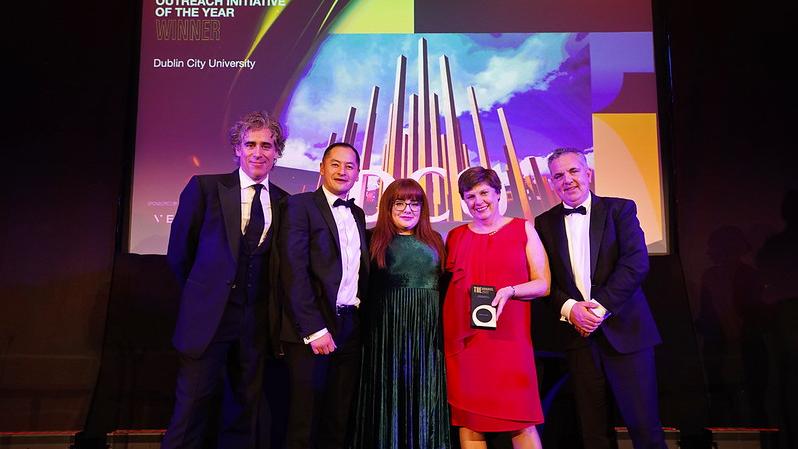 DCU Access to the Workplace Programme wins THE Award

DCU’s Access to the Workplace won the Widening Participation or Outreach Initiative of the Year and our Estates team won Outstanding Estates Team.

The THE Awards are the biggest celebration in the HE calendar, attracting hundreds of fantastic entries from individuals, teams and institutions, and from all corners of the UK and Ireland.

What THE had to say about the DCU Award winners

Dublin City University’s Access DCU nosed ahead of the competition with its aim to support disadvantaged students’ entire journey through higher education and beyond.

In what the judges said was a “well-developed” entry, DCU cited research reporting that graduates from disadvantaged areas continue to earn less than their contemporaries from more affluent backgrounds.

Access DCU aims to promote higher education to thousands of primary and secondary school students from under-represented communities, and intends to support more than a thousand undergraduate students throughout their programmes. A unique element is its offer of full-time, paid summer internships for second-year students.

Since the programme began in 2019, 245 students have been placed in 82 companies, with 93 per cent saying they could not have secured the placements on their own. The interns, a third of whom were born outside the Republic of Ireland, collectively earned €566,600 (£494,000).

Not only do companies provide the internships, they also commit to funding the DCU Access Scholarship Programme, and they have contributed more than €1 million since 2019. In summer 2020, as companies struggled with the switch to virtual internships, DCU also developed an internship toolkit for hosts and students.

The judges agreed that the strong career focus really set DCU Access apart from similar schemes. “In particular, additional help in finding business internships is a valuable support for students who often lack the contacts enjoyed by those from better-off backgrounds,” they said. “It recognises that the challenges facing those students do not end upon admission but continue as their academic career develops.”

“Two and a half years after the Covid crisis hit, it is easy to forget or to take for granted the exceptional challenge that it posed to universities.

Not only was the world looking to our scientists and research teams to find a way out of the pandemic, universities were also being asked to continue to teach and nurture cohorts of students who, like all of us, had seen their lives and plans turned upside down.

The Times Higher Education Awards have, for almost two decades, tracked the exceptional achievements of our universities – surely these islands' greatest asset.

This year, the shortlists and winners reflect a particular moment in time, the 2020-21 academic year, when universities were coming to terms with and continuing to respond to the changed circumstances imposed by the pandemic.

As such, it is inevitable that those heroic efforts related to the Covid crisis are represented, but what is perhaps more striking is how rich and diverse the entries to this year’s awards were, how focused on the core missions of universities to deliver world-changing research, life-changing teaching, and all the other ways in which they engage and support communities, regions and the country.

There is little sense in this year’s submissions, and particularly among the winners, of universities struggling through such exceptional times.

Instead, the picture that is painted is of a sector that has risen to the occasion with skill and confidence, and refused to be pushed off course.”

Reducing water consumption is a key plank of higher education institutions’ environmental impact plans, and Dublin City University is leading the way on this front.

Under a multi-campus water conservation strategy, between 2016 and 2020 water consumption at DCU reduced from more than 13,000 litres per person to about 10,600 litres – an 18 per cent drop. In the first year of activity alone, the university saved the equivalent of 15 Olympic swimming pools’ worth of water by repairing leaks, introducing sub-metering to identify significant water consumers and trialling energy-efficient fittings in campus residences.

Mandatory water audits and upgrades of water fittings were added to refurbishment projects, and the installation of a digitally connected water sub-metering system now allows for water usage to be monitored, analysed and targeted in a similar way to energy.

The DCU estates team’s efforts were recognised with an ISO 50001 certification for water and energy management, and it was also named an Irish Water Steward, an accreditation underpinned by the European Water Stewardship Standards.

Our judges were impressed by what they called a “singularly focused project that is eminently replicable elsewhere”.

The panel noted that progress on campus had been mirrored by efforts to encourage water conservation in the local community via outreach events and that “this work continues: building on the significant achievements of recent years, new and ambitious targets have been set for this year and beyond”.

A full list of the awardees is available here 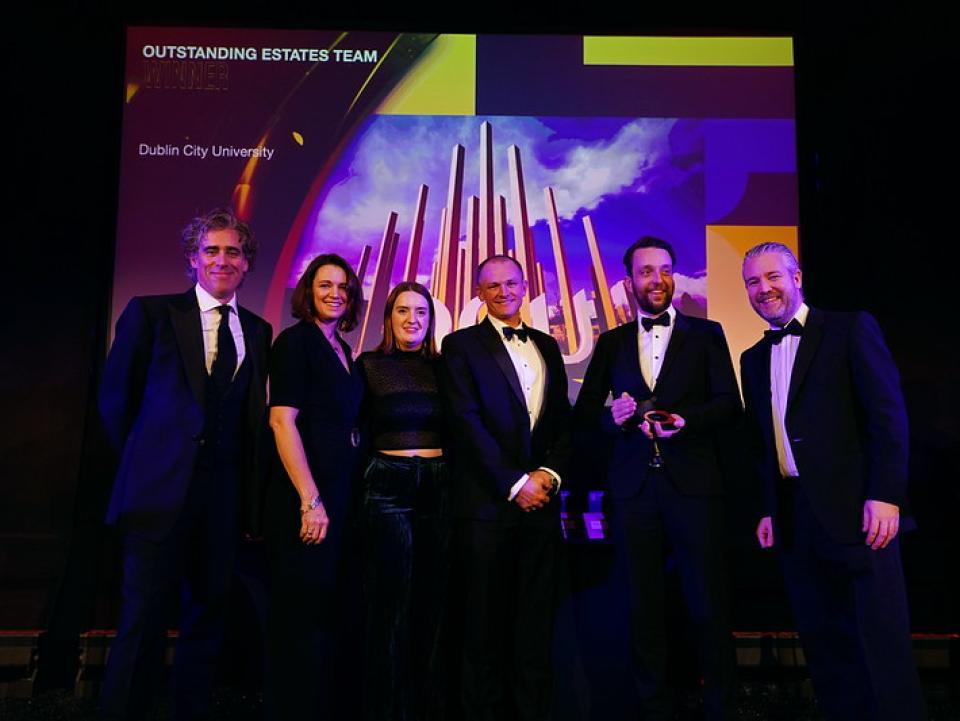