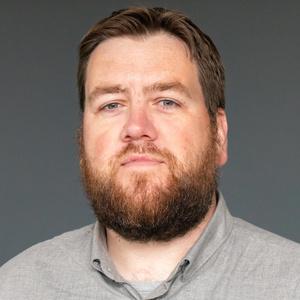 Tom Burke is currently researching a PhD by Artefact with the working title The Consent Interval: Ethics in Documentary Filmmaking.  The project will itself take the form of a documentary film featuring leading practitioners speaking on camera about ethical dilemmas they have encountered while making their work.

Tom has been making film and video projects of varying scales and styles for over a decade. Working primarily in the documentary form, he often assumes a shooting director role, and more often than not will be the editor of his own films. Regardless of format or output medium, the goal is alwaysthe same; telling stories honestly, simply and with respect for those in front of the lens.In 2018, his feature documentary ‘Losing Alaska’ premiered at the IDFA documentary festival in Amsterdam and is currently touring festivals worldwide. In early 2019, his television documentary ‘Shooting the Darkness’ premiered to critical acclaim in Ireland, France and Germany and will premiere on the BBC in late 2020.Tom is currently working on a slate of factual projects and is an assistant Professor at Dublin City University where he teaches ‘Moving Image’ and video production at the School of Communications (@DCU_SoC)
Tweets by DCU