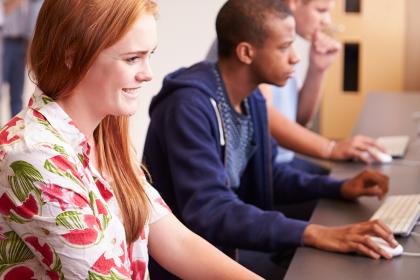 You’ll graduate with an honours degree in one of five areas, Media Studies (DC291), the course is described in more detail in the About the Course in the tab above.

You’ll have the option to take a year abroad, extending your degree to four years and graduating with a Bachelor of Arts (Joint Honours) International.

Internship Year You can opt to apply for a year-long INTRA work placement in Year Three. This will give you a unique opportunity to enhance your CV, increase your employability and experience the relevance of your study in the real world. This option is competitive and subject to the availability of placements. For more information on the INTRA programme at DCU, please visit www.dcu.ie/intra

This programme will prepare you for a variety of careers and also provides a foundation for postgraduate study.

I picked the Bachelor of Arts programme because it meant I could study two languages at the same level. DCU was a great choice; being under the school of Fiontar meant the teaching quality was excellent and loads of facilities were available to me. I also had the opportunity to spend a year studying in France with the course which was great

Select Media Studies + One other subject from:

Media Studies: You'll learn how we are shaped by culture, about the social and economic pressures on media organisations and the way mass media are used by government, corporations and others to influence us as citizens and as consumers.

English: You’ll engage with a wide range of literature and become familiar with the vital characteristics and contexts of drama, poetry, film and fiction.

Exceptional Facilities
DCU students enjoy exceptional teaching and learning facilities across our 3 academic campuses. These include modern learning theatres, research centres, television and sound studios, classrooms, computer suites and advanced laboratories in the areas of languages, engineering, physics, chemistry and biotechnology, as well as a sports performance centre and a virtual hospital ward.

A Vibrant, Dynamic Social Environment
Student facilities include a superb sports complex with a 25 metre pool, two libraries and The Helix, our renowned performing arts centre. In 2016 we announced plans to invest over €230m in developing new, world-class facilities across our three academic campuses. Already building has begun on an exciting, new €14m Student Centre that will be home to the more than one hundred and twenty student clubs and societies. This commitment to student facilities means that our world-class learning experiences are complemented by a vibrant, dynamic social environment.

I picked the Bachelor of Arts programme because it meant I could study two languages at the same level. DCU was a great choice; being under the school of Fiontar meant the teaching quality was excellent and loads of facilities were available to me. I also had the opportunity to spend a year studying in France with the course which was great

Media Studies graduates generally have excellent communication, analytical and team-working skills – skills that are in high demand in the knowledge economy. These graduates are likely to find employment in a range of commercial, state, and non-governmental organisations, and they will have a competitive advantage in careers like advertising, marketing, public relations, advocacy and international development.

Minimum of H4 in English

French: Minimum of H4 in French

German: Minimum of H4 in German

Spanish: Minimum of H4 in Spanish

For details of QQI requirements and relevant codes please click here. Simply enter the DC code for the programme you are interested in or if you are not sure of the code enter DC in the Select by Institution option, then click on Go.

Applications are welcomed from students who have studied at Level 6, Level 7 and Level 8 in relevant areas. Such transfer students may be exempt from certain modules. Please apply directly to DCU using the R10 form. Closing date for applications 1st July.

International candidates are expected to have educational qualifications of a standard equivalent to those outlined above. In addition, where such candidates are non-native speakers of the English language they must satisfy the university of their competency in the English language. For further information on international applications click here.

All mature applicants apply through the CAO by 1st February. For further information and for special application procedures click here

Candidates should apply directly to DCU. Applications are accepted on an ongoing basis up to 1st July. All Non-EU candidates are advised to apply early, as places are limited.

Apply directly to DCU by the 1st July