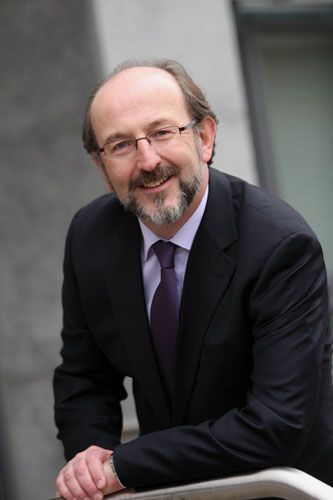 Brian MacCraith received his B.Sc. in Physics at NUI, Galway, where he also completed a M.Sc. and Ph.D. in Optical Spectroscopy of Laser Materials. In 1986 he joined the staff of Dublin City University (DCU) where he has played an active role in the teaching of Physics and research in the areas of optical chemical sensors and biosensors, biomedical diagnostics and nanobiophotonics.  In October 1999 he became founding Director of the National Centre for Sensor Research (NCSR; www.ncsr.ie) at DCU. The NCSR has now grown to a scale of over 200 researchers working on cutting-edge developments and applications of physical, chemical and biological sensors. In 2005, he led a proposal to establish the Biomedical Diagnostics Institute (BDI; www.bdi.ie) at DCU and was appointed as its first Director. The BDI is a large-scale, Academic-Industrial-Clinical partnership (funded by Science Foundation Ireland under their CSET Scheme) and involves over 120 researchers focused on the development of next-generation Point-of-Care diagnostic platforms.

Professor MacCraith is renowned internationally for his research on optical chemical sensors and biosensors. He has a substantial track record of publications and intellectual property in this area. He is a member of the Royal Irish Academy (RIA), a Fellow of the Institute of Physics, a Fellow of SPIE (the international Photonics Organisation), and a Fellow of the Irish Academy of Engineers.  Currently, he is a member of the Forfas Advisory Council on Science, Technology & Innovation. He is on the Boards of IBEC (the Irish Business and Employers Confederation), Social Entrepreneurs Ireland, and the National Chamber Choir. He also chairs the Boards of SciFest and Genio.

In July 2010, he was inaugurated as President of Dublin City University, a position that he will hold for 10 years. In September 2012, the first Strategic Plan (‘Transforming Lives and Societies’) under Professor MacCraith’s leadership was launched by the Minister for Education and Skills, Ruairi Quinn TD. Among a range of priorities, the Plan highlights the President’s commitment to issues such as innovation and entrepreneurship, technology-enhanced learning, engagement with enterprise, and a research agenda addressing global grand challenges (e.g. health, ageing, sustainability, digital society).

Further information is available at: http://www.dcu.ie/president/biography.shtml