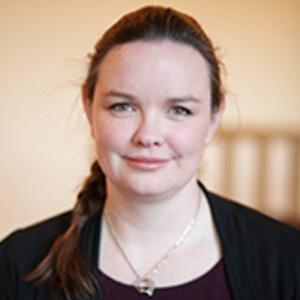 Dr. Tanya Ní Mhuirthile joined the School of Law and Government in September 2015, having previously held positions in both Griffith College and University College Cork. A graduate of University College Cork (BCL 2000, LLB 2005, PhD 2010) and  the Royal Scottish Academy of Music and Drama (MDra 2002), Tanya teaches undergraduate modules in the ares of Equity,  Trusts, Irish Legal System and Law and Body Politics.

Tanya's research interrogates the interaction between the body and law and draws on human rights law, medical law, law and gender theory and feminist jurisprudence. Tanya is a legal consultant to both Transgender Equality Network Ireland and IntersexUK. She has advised advised Government ministers, public representatives and civil and public servants on the drafting of legislation and the development of public policy in particular in relation to the Criminal Justice (Female Genital Mutilation) Act, 2012 and Gender Recognition Bill 2013, Legal Recognition of Gender Bill, 2013 and the Gender Recognition Act 2015, including: the Minister for Social Protection, the Minister of State at the Dept of Social Protection with Special Responsibility for Activitation, the Minister for Children and Youth Affairs and other Oireachtas members. Tanya has also advised NGOs, including Amnesty International, Irish Council of Civil Liberties, Transgender Equality Network Ireland, IntersexUK, International Lesbian, Gay, Bisexual, Trans and Intersex-Europe (ILGA-Europe), and Transgender Europe on their policy initiatives relevant to her research expertise, both in Ireland and abroad. Internationally, Tanya has provided ad hoc legal advice to the UN Special Rapporteur on the Right of Everyone to the Enjoyment of the Highest Attainable Standard of Physical and Mental Health and the Chairperson-Rapporteur of the Working Group on the Issue of Discrimination Against Women in Law and in Practice.
In November 2017, Tanya was appointed to the Gender Recognition Act Review Group by Minister Regina Doherty.

My research interrogates the impact which law’s conception of corporeality has on certain types of bodies and reflexively, the issues which particular interventions on bodies raise that challenge certain assumptions of the law. Therefore it is quite interdisciplinary with a primary focus on law but drawing from medicine, ethics, sociology and history. The main legal areas which my research covers are consent in medical law and ethics and human rights law which I consider through the lens of gender, sexuality and law.

There are three main themes to my research. The first, building on my doctoral work considers the parameters within which law conceptualises gender recognition for legal purposes. Using human rights arguments around dignity, privacy and self determination as a basis, I have argued for a depathologisation of legal gender recognition. Conceiving legal recognition of gender within a medical model, I contend, conflates medical treatment pathways with access to legal rights such that the former acts as a barrier to the later. Much of my work in this area in the past few years has focused on policy development and advising both the Minister for Social Protection, the Minister for Children and Youth Affairs, other Oireachtas members, NGOs and UN officials on drafting gender recognition legislation.

The second theme also builds on work undertaken as part of my doctoral studies and research conducted as a postdoctoral fellow on an IRCHSS funded project Gender Equality, Multiculturalism and Religious Diversity in Contemporary Ireland at the School of Law in UCC. It investigates whether it is possible to martial medical law principles on consent both to protect vulnerable people from potentially unwanted medical or surgical interventions which would permanently alter their bodies while simultaneously ensuring that autonomous adults can consent to such permanent alterations. Thus far this theme has interrogated issues such as consent to treatment for intersex children and the creation of legislative frameworks to protect against female genital mutilation practices. Under this theme, my research also examines emerging medical technologies, such as in the area of womb transplantation and assisted human reproduction, to uncover the limits or opportunities which law’s understanding of the ‘acceptable’ body might place on the regulatory or legislative framework surrounding such innovations.

The final strand of my research has developed from my teaching interest in legal systems and skills. I have become interested in exploring the role of legal education in legal systems. In particular, I am intrigued by the transformative potential of law as a tool for social justice and uncovering the extent to which this underpins both the structures of the legal system and the education of future lawyers. To this end I have written a book with Liam Thornton and Catherine O’Sullivan for Round Hall Press Fundamentals of the Irish Legal System: Law, Policy and Politics which will be published in 2016.
Go to Tanya Ni Mhuirthile's full profile

Book Launch: Electoral Competition in Ireland since 1987: The politics of triumph and despair