Each year the School of Physical Sciences makes awards of its own to graduating 4th year students to note outstanding academic achievements. Details of these awards are given below. 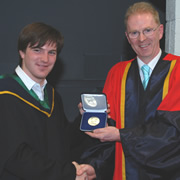 Lynam medal (endowed by Mr. Harry Lynam, an applied physicist and entrepreneur who founded a number of very successful physics-based companies, including Lake Electronics, which have employed a broad range of scientists and engineers in leading edge technologies)

> Awarded for the best overall performance in the Applied Physics degree programme (1987 - 2014) and thereafter across all physics programmes (2014 - present).

Fryar medal (instituted following the death in 1990 of Dr. Joe Fryar, a colleague in the School who placed particular emphasis on experimental skills)

> Awarded for the best overall performance in the final year project across all physics programmes (1992 - present).

Plummer medal (instituted in the name of Prof. Henry C.K. Plummer, Andrews Professor of Astronomy in Trinity College Dublin, Royal Astronomer of Ireland and director of Dunsink Observatory from 1912-1921)