Skip to main content
School of Physical Sciences
Below Image

The School of Physical Sciences is delighted to announce that Cleo Harvey has won the Earnshaw Medal for 2015. Each year the Institute of Physics in Ireland awards the Earnshaw Medal to the undergraduate student who presents the best final year project. Cleo's project was supervised by Prof. Colette McDonagh in collaboration with Ocean Optics. An abstract of Cleo's work can be found below

Surface-Enhanced Raman Spectroscopy (SERS) has emerged as a prevalent spectroscopic technique, capable of ultrasensitive trace level detection of chemicals and identifying them based on their fingerprint vibrational characteristics. This project set out to further investigate and characterize the low cost, mass producible SERS substrates commercially available from Ocean Optics. These substrates consist of metal nanoparticles that are embedded in a 3D matrix of cellulose fibers. An experimental setup was developed so that the morphological changes of the nanoparticles in the substrate could be monitored after successive laser exposures using a Scanning Electron Microscope (SEM). This qualitative data was supported by the SERS signals responses and showed that the time delay for optimal signals could be attributed to the redistribution of the medium in which the nanoparticles lie as well as some chemical effects. Surface plasmon resonances of nanostructures lie at the heart of the SERS enhancement, thus reliable control of the size and stability of the nanoparticles are crucial for overall performance. Several techniques for characterization of the nanoparticles are implemented in this project. Metal-Enhanced Fluorescence is another powerful analytical technique that is governed by similar enhancement mechanisms as SERS. Thus, the Ocean Optics SERS substrates were investigated for their compatibility as Metal-Enhanced Fluorescence (MEF) substrates and this showed exciting potential. Finally, some modelling of the nanoparticles was explored using a Finite Difference Time Domain (FDTD) algorithm from the open source OptiWave simulation platform. 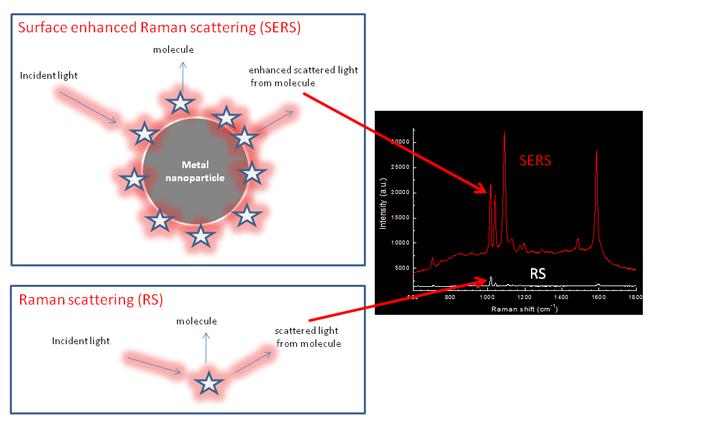 Figure 1.Schematic of the surface-enhanced Raman signal in comparison to the Raman signal from molecule alone[1]