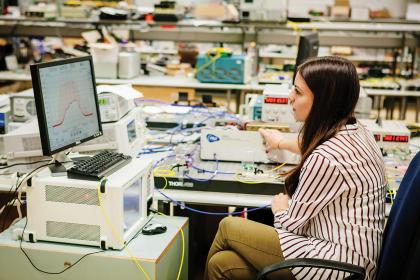 View our video on our BEng and MEng in Electronic and Computer Engineering here:

An electronic and computer engineer is a problem solver by nature—a person who wonders about how things work and how to make things right. Mathematics is the universal language of engineering, and you’ll need to be comfortable with logical and methodical approaches to understanding real-world phenomena. Leaving Cert Honours in Mathematics and (where available) Leaving Cert in Applied Mathematics, when well understood, are excellent indicators of ability in the field of electronic and computer engineering.

Your thirst for knowledge and drive to contribute to society will lead to constant learning and innovation throughout your career. It’s no surprise then that 33% of the S and P 500 CEOs’ undergraduate degrees are in engineering—higher than any other discipline.

This single programme, with four major options in Year Four, replaces and combines the best of DCU’s previous offerings in Electronic Engineering, Digital Media Engineering and Information and Communications Engineering.

You’ll be taught through conventional lectures, extensive tutorials (particularly in Year One), laboratory exercises and projects. Through these you’ll develop the ability to model and analyse the dynamics of a wide range of technological systems, as well as learn a creative and innovative approach to problem solving. The curriculum of the first three years and the 22.5 credits of core modules in Year Four are common to all ECE students.

In addition to the traditional engineering focus on mathematics and design, there is a strong software and programming theme running through our ECE programme. You’ll learn about C, C++, Java, Embedded Systems, Linux and Windows Operating Systems, Data Structures and Algorithms, Hardware Description Language, Object-oriented Programming, and in two of the Year Four majors, Web Application Development.

In Year Three, you’ll participate in a six-month INTRA work placement. Most students choose a paid engineering internship with a business in Ireland, but some students may go abroad or be placed in research positions within DCU.

In Year Four, you’ll select a major option and gain relevant skills through major-specific modules and an individual undergraduate project. Currently the course offers the following four majors, which we’ll adapt over time so that our graduates have the most relevant and up-to-date technology and expertise:

In Year Four you’ll also do an individual major-relevant project that will allow you to work in a specialist area of your choosing and apply the electronic and computer engineering skills that you will have acquired during your studies.

Six months (usually paid) INTRA work experience in Year Three
Year Four choice of majors in Systems and Devices, High-Speed Communications, Digital Interaction or The Internet of Things
High level of graduate recruitment by SME and multinational employers in the electronics sector, at home and abroad
International engineering accreditation through the Washington Accord

Exceptional Facilities
DCU students enjoy exceptional teaching and learning facilities across our 3 academic campuses. These include modern learning theatres, research centres, television and sound studios, classrooms, computer suites and advanced laboratories in the areas of languages, engineering, physics, chemistry and biotechnology, as well as a sports performance centre and a virtual hospital ward.

A Vibrant, Dynamic Social Environment
Student facilities include a superb sports complex with a 25 metre pool, two libraries and The Helix, our renowned performing arts centre. In 2016 we announced plans to invest over €230m in developing new, world-class facilities across our three academic campuses. Already building has begun on an exciting, new €14m Student Centre that will be home to the more than one hundred and twenty student clubs and societies. This commitment to student facilities means that our world-class learning experiences are complemented by a vibrant, dynamic social environment.

Electronic and computer engineers are sought by Irish and international organisations in the following areas and beyond:

The engineering schools consider transfer requests based on the performance of the candidate. The overall

set of guidelines which is in use for HETAC/NCEA equivalent qualifications is as follows:

International candidates are expected to have educational qualifications of a standard equivalent to those outlined above. In addition, where such candidates are non-native speakers of the English language they must satisfy the university of their competency in the English language. For further information on international applications click here.

All mature applicants apply through the CAO by 1st February. For further information and for special application procedures for mature students, please click here

Candidates should apply directly to DCU. Applications are accepted on an ongoing basis up to 1st July. All Non-EU candidates are advised to apply early, as places are limited.

Apply directly to DCU by the 1st July