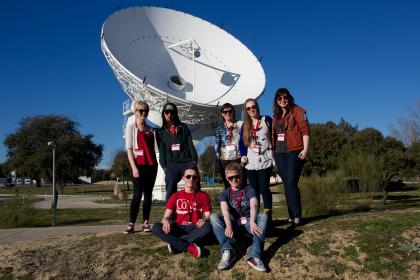 masha.chernyakova@dcu.ie
Programme PDF
Physics with Astronomy55.92 KB
Join us for our CAO Information Evening from 4pm-7pm on Tuesday 18th January 2022 and chat to students live about studying at DCU - Click here to register >>
Introduction

On successful completion of Physics General Entry you will progress to Year Two of one of the following, and complete three further years of study:

The oldest of the sciences, astronomy is an almost boundless field, encompassing aspects of physics, astronomy, astrophysics, and the growing field of space science and technology.

Along with the fundamentals of physics and astronomy, the Physics with Astronomy degree’s curriculum includes optics, high-end computing and image processing.

Over the duration of this course, you’ll have the chance to learn about observational astronomy and the instruments and techniques used to study the stars and can look forward to working with real astronomical data from a variety of telescopes and observatories worldwide. Throughout, there is an emphasis on laboratory experience and you’ll have the opportunity to collaborate with professional DCU astronomers whose work is at the forefront of international astronomical research.

Over the duration of this course, you’ll work with real astronomical data from a variety of telescopes and observatories worldwide. Throughout the degree, there is an emphasis on laboratory and project work (both individually and in groups) and IT skills, which are valuable skills for your future.

The first two years focus on classical and modern physics, combined with various aspects of astronomy, as well as mathematics, electronics and computing.

In Year Three, you can take a five-day field trip to a foreign observatory or choose to work in industry or a research group as part of your INTRA placement.

In the final year of the course, you’ll have a choice of topics, allowing you to concentrate on various applied aspects relating to physics and astronomy.

A major element of Year Four is your individual laboratory-based project that gives great scope for individual initiative. It also entails working with professional astronomers on the academic staff at DCU, whose work is at the forefront of international astronomical research. On several occasions, final-year physics students with exceptional project work have received national and international awards from the Undergraduate Awards, the Institute of Physics and the International Society of Automation.

During the course, you’ll be encouraged to apply for scientific internship schemes, including visiting fellowships in organisations such as the European Organisation for Nuclear Research (CERN) and the European Space Agency (ESA).

For more information on every aspect of studying at DCU visit our CAO Hub where you can listen to taster lectures, hear from our student ambassadors and find answers to frequently asked questions.

DCU students enjoy exceptional teaching and learning facilities across our 3 academic campuses. These include modern learning theatres, research centres, television and sound studios, classrooms, computer suites and advanced laboratories in the areas of languages, engineering, physics, chemistry and biotechnology, as well as a sports performance centre and a virtual hospital ward.

Student facilities include a superb sports complex with a 25 metre pool, two libraries and The Helix, our renowned performing arts centre. In 2016 we announced plans to invest over €230m in developing new, world-class facilities across our three academic campuses and a new U Building, a Student Centre that is home to the more than one hundred and twenty student clubs and societies. This commitment to student facilities means that our world-class learning experiences are complemented by a vibrant, dynamic social environment.

Physics wiht Astronomy is an exciting course that gives you the scientific and mathematical tools to unlock the secrets of the Universe: from understanding the life and death of stars to investigating the strucutre of our galaxy and the wider cosmos.

Everything that I have learned throughout my degree in Physics with Astronomy has prepared me for a wide range of career opportunities. The investment and encouragement of the academic and technical staff has inspired me to seek further education and develop a career in research. I am now undertaking a PhD in Space Engineering. Each day, I find that the knowledge and skills that I have gained from my time at DCU have proven invaluable to my work.

With your BSc behind you, you’ll find opportunities in a wide range of business, scientific and industrial sectors in the areas of physics as well as astronomy and space science. Employers want people with technical knowledge and good written and oral communication skills and people who are capable of working well independently and in a team environment. These are all skills you will learn in this course.

The international nature of both physics and astronomy means that you will have many opportunities for travel or you may prefer to pursue postgraduate studies (M.Sc. or Ph.D.) in physics or astronomy.

Further useful materials and resources on the many interesting and diverse career opportunities available to physics graduates are available on the Institute of Physics website.

Holders of Higher Certificate/National Certificates or Bachelor (Ordinary) Degree/National Diplomas with Merit or Distinction may be admitted into second year if the relevant Programme Boards are satisfied that the candidate has achieved an appropriate standard in the major subjects covered in Year One. Direct entry into third year is possible for well-motivated students holding a distinction at Diploma level in a related discipline.

Please note there is no transfer entry route to year one of this programme.

There is no direct entry to the programme. All entries to this programme are via DC175 Physics General Entry

There is no direct entry to the programme. All entries to this programme are via DC175 Physics General Entry. For further information on international applications click here.