WHAT LONG TERM IMPACT WILL SCHOOL SHUTDOWN HAVE ON CHILDREN?

Closing schools over Covid 19 is set to cause lasting harm, particularly for children with special needs and those from disadvantaged backgrounds, writes Carl O’Brien. READ MORE

NEW GOVERNMENT MUST URGENTLY FACE UP TO THE CRISIS OF PUPILS' NEEDS IN DEIS SCHOOLS: DR PAUL DOWNES and NIAMH MURRAY

CHILDREN'S CHARITIES CALL FOR ACTION ON CHILD POVERTY BY NEXT GOVERNMENT

Too many children are living in consistent poverty - with no access to hot meals at school or access to counselling.  That's according to a number of charities who have written a letter to coincide with today's UN's World Day of Social Justice. READ MORE

More than 200 children have attended school so little over the past two years that their parents or guardians have been issued with legal proceedings by Tusla writes Eoghan Murphy. READ MORE

INTERVIEW WITH DR PAUL DOWNES ON SCHOOL ATTENDANCE ISSUES: RADIO NEWS FEATURES. THURSDAY NOVEMBER 21ST 2019. NEWS ON THE HOUR FROM 6AM TO 10AM

DIFFICULTIES IN EDUCATION CAN CONTRIBUTE TO HOMELESSNESS, REPORT FINDS

The research allows the Peter McVerry Trust to move beyond anecdotal reports from young men who use homeless services about how they fared in the education system and it will help influence the future education strategies of the State, writes Ann Marie Foley. READ MORE

SUSPENSIONS AND EXPULSIONS OF BOYS FROM SCHOOL LINKED TO HOMELESSNESS

An end to pupil suspensions and expulsions is called for in a new study that draws a link between unhappy educational experiences and homelessness among young men, writes Katherine Donnelly.   Irish Independent, November 7th 2019.   READ MORE

Young homeless men are more likely to have been excluded from school, either through suspension or expulsion, a new study examining their experiences of the education system has found, writes Jess Casey.   Irish Examiner, November 6th 2019.   READ MORE

HALF OF HOMELESS MEN ‘EXPELLED OR SUSPENDED AT SCHOOL’

Students should never be suspended or expelled from school and instead should be helped with their behaviour, an academic from Dublin City University has said, writes Ronan Early.  Times UK, November 6th 2019.   READ MORE

THE LINKS BETWEEN ADVERSE SCHOOL EXPERIENCES AND HOMELESSNESS

'THE TEACHERS HATED ME': HIGH RATE OF SCHOOL SUSPENSIONS AMONG HOMELESS MEN REVEALED BY NEW STUDY

Failings in the school system increase the risk of homelessness, according to a new study. Homeless men are more likely to have faced suspension and exclusion from school, a new study from Dublin City University suggests.  The Journal, November 6th 2019.   READ MORE

HOW SLEEP LOSS AFFECTS CHILDREN AND TEENS' EDUCATION AND HEALTH

A SLEEPING PROGRAMME taught in school and at home might be the answer to improving children’s sleep behaviour, according to a study by Dublin City University (DCU).   As part of the study, 24 sixth-class children in an urban DEIS primary school were taught a sleep-based class by their teacher at school and their parents at home for five weeks. A study of sixth-class pupils found a 21% rise in those going to bed before 11pm after learning more about sleep, writes Orla Dwyer. READ MORE

BEDTIME 'TOO LATE' FOR SCHOOL CHILDREN WHO SUFFER SLEEP DEPRIVATION

Huge levels of sleep deprivation among 11 and 12 year olds in a disadvantaged area have emerged in a new study showing that a quarter were not in bed before 11pm.  A further one in three (33pc) were only tucked up between 10pm and 11pm.  There was a dramatic improvement in sleep habits after a trial conducted by researchers at the Dublin City University (DCU) Educational Disadvantage Centre writes Katherine Donnelly. READ MORE

DCU STUDY ON HOW TO IMPROVE CHILDREN’S POOR SLEEP HABITS

A Dublin City University study shows a notable improvement in children’s sleep behaviours by implementing a short school and home-based programme.  The link between inadequate sleep levels in children and poor engagement with school is well documented, with poor sleep duration causing excessive daytime sleepiness, which leads to problems with concentration, attention and cognitive functioning.   This study carried out at the Educational Disadvantage Centre, DCU Institute of Education, has found that by implementing a five-week intervention programme, the attitudes of school children towards their own sleep behaviour, their motivation to improve their sleep health and their approach to using electronic media before bedtime, greatly improves.  READ MORE

Primary schoolchildren are three times more likely to believe they should avoid using electronic devices an hour before bedtime after they took part in a study on sleep.   A Dublin City University study that sought to monitor and change the sleeping habits of 24 sixth-class pupils in a disadvantaged area reported an “increased awareness of the negative impacts of the use of electronic media on sleep”.    Before the five-week study, less than one in five children agreed that they should not use electronic devices an hour before bedtime. After the study, almost half of the children agreed with the statement.  The study found that after the “five-week intervention period” where children were asked to record times they went to bed, woke and how they felt, writes Ronan Early

HOT SCHOOL MEALS SHOULD BE A ROUTINE FACT OF IRISH LIFE

We trail our European cousins when it comes to providing nourishment to school children.   It was heralded as a long-overdue opportunity to help children and struggling families. A Government-funded pilot scheme to provide hot meals to school children was supposed to bring Ireland into line with other European countries.  But records released under the Freedom of Information Act show that the Department of Social Protection turned down 470 primary schools who applied to the scheme. While 36 will benefit from the move, campaigners say that free hot meals in schools should be more widely available, writes Peter McGuire. READ MORE

HOMELESS CHILDREN IN EDUCATION: 'SHE IS VERY TIRED IN SCHOOL, EXHAUSTED, I WOULD BE TOO IF I HAD TO TRAVEL'

BREAKING THE MOULD FOR ENTRY TO TEACHING 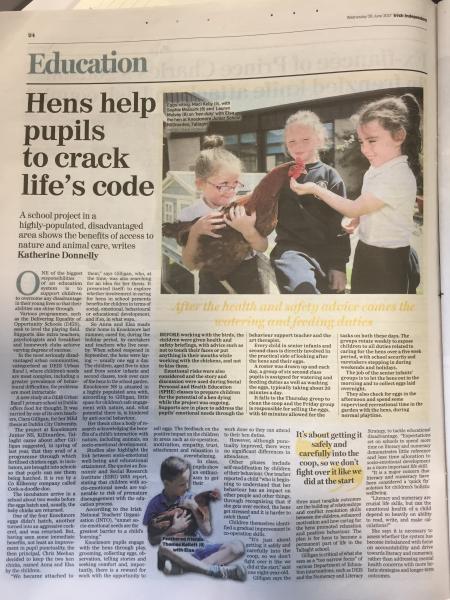 INSIDE STORY: A NEW WAY WITH WORDS.

SCHOOLS GET READY FOR SOME INCREDIBLE YEARS

NON-ATTENDANCE A SYMPTOM OF WIDER PROBLEM

PUPILS STRUGGLING WITH HUNGER AND EMOTIONAL PROBLEMS IN CLASSROOM

TOO MUCH FOCUS ON MISBEHAVIOUR, SAYS EXPERT

REMARKS BY FERGUS FINLAY AT ‘BEYOND EDUCATIONAL DISADVANTAGE’ LAUNCH

POORER PUPILS TOO STRESSED TO SLEEP

Less than 3% of spending on education goes to adult training

PUTTING OUR CHILDREN AT A DISADVANTAGE

Unfair burden on the poorest children

BOOK EDITORS CALL FOR HEALTH AND EDUCATION TO BE LINKED

Dealers are 'forcing deprived teens' to mind their drugs'

Third of pupils too hungry to do school work, survey finds

EU Report on the prevention of bullying and violence in schools

Why they leave school early

Living with heroin…Review. Drugnet Ireland, newsletter of the Drug Misuse Research Division of the Health Research Board, (2004), Issue 10, (March), p.17