Quality Development of Out of Schools Service (QDOSS)

National Children in Care and the Education System Working Group

Board of Directors of Dublin North West Area Partnership, Dublin

Board of Directors of the Ana Liffey Drug Project, Dublin

Advisory Committee to the Childhood Development Initiative, Tallaght, Dublin project on speech and language therapy. Project funded by the Irish Ministry for Children and Youth Affairs.

Research Advisory Group to the Childhood Development Initiative, Tallaght, Dublin for its research on the cost-effectiveness of speech and language therapy

The DCU Access Office and the Educational Disadvantage Centre on St Patrick’s Campus have joined forces to launch a Community Engagement Initiative.   It is accepted that for some communities there are many barriers to participation in 3rd level education, especially Initial Teacher Education, and the aim of this Initiative is to identify these barriers and investigate ways and means to overcome them.  The two groups focussed on will be Traveller and ethnic minority students who, for many and varied reasons, have been underrepresented in Initial Teacher Education.

Provisional figures released by the Higher Education Authority in August 2014 showed that 280 young Travellers were in their final year of secondary school. This HEA survey data indicated that, on average, just 23 of these enter full-time higher education each year.  With regards to ethnic minority students, current census data informs us that ethnic minorities comprise a sizeable proportion of today’s school-going population.

Role models are needed in the teaching profession from both these communities to support the cultural identity, motivation and learning of these diverse groups.

The Community Engagement Initiative will be co-ordinated by Margaret Lamont, Access Officer, and Valerie McLoughlin, Administrator of the Educational Disadvantage Centr,e both situated on St Patrick's Campus

On Thursday 28th April 2016, a group of students from Margaret Aylward Community College visited St Patrick’s Campus. The invitation was extended by the Educational Disadvantage Centre and the St Patrick’s College Access Office and was facilitated by the Ballymun Anseo SCP co-ordinator, Jennifer Cummins. It is one of a range of initiatives as part of both areas of the Community Engagement Initiative to address the barriers to participation in 3rd level education, specifically Initial Teacher Education, and to investigate ways and means to overcome them. Part of the visit was taken up with an art workshop facilitated by Seódín O’Sullivan; the photograph below features some of the girls and their artwork 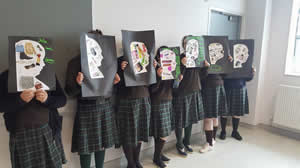 Other members of the Advisory Group consist of a range of representatives from organisations and schools across the country, including Dr. Peter Archer, Head of the Education Research Centre (ERC), Aidan Savage, Chair of the National School Completion Programme, John Lonergan, Governor of Mountjoy Prison, Emer Smyth and Delma Byrne of the ESRI, and Dermot Stokes, Director of Youthreach. Senator Fidelma Healy Eames has convened the group on behalf of the Joint Oireachtas Committee for Education and Skills, with Jude Cosgrove from the ERC assisting with the research.

Members of the Expert Advisory Group to the Joint Oireachtas Committee on Education and Science.

The report of the Joint Committee in Education and Skills on Early School Leaving was launched at Leinster House on Tuesday 25 May 2010. Entitled Staying in Education: A New Way Forward - School and Out-Of-School Factors Protecting Against Early School Leaving, the report identifies the reasons behind early school leaving and offers solutions. The report was produced by Senator Fidelma Healy-Eames on behalf of the Committee with assistance from Dr Jude Cosgrove of the Educational Research Centre. Launching the report, Paul Gogarty, TD, Chairman of the Joint Committee, described it as a timely and important contribution in an area of fundamental importance. He congratulated the ERC and the College on its contribution and on its initiatives in the area of access and disadvantage. The members of the expert group which assisted in the preparation of the report included Dr Peter Archer, Dr Paul Downes, Dr Ann Louise Gilligan, and Dr Jude Cosgrove.