Augmenting educators’ skills in use of e-portfolios

Learning portfolios had been called for in DCU in the 2012-2017 strategic plan.  The Loop Reflect Learning Portfolio was launched in September 2016. Based on Mahara, the open source platform, the portfolio aimed to make learning visible through the creation of a personalised and reflective living showcase of academic, professional, and personal achievements. A number of pilot projects were selected to use Loop Reflect across a range of disciplines and in a range of different contexts. At the end of the one year pilot programme,  there were approximately 5,200 registered users on the platform. In 2017/18 following a formal launch attended by the Minister of education, the Learning Portfolio platform was made available to all faculty and students. There are currently over 19,000 registered users, with almost 9,000 active users in the academic year 2019/20.  DCU has the largest eportfolio implementation of any higher education institution in Ireland (National Survey of Eportfolio Practice, 2019).

The initiative has been embedded into over 50 programmes and has played a critical role in supporting assessment and work placement across all faculties. Additionally, it has supported ongoing co-curricular activities such as the Mentoring scheme and Student Engagement awards. The eportfolio project was awarded the Learning Technology Team of the Year Award 2018 by the Association of Learning Technology (ALT) which particularly noted the collaboration with student eterns to support and promote eportfolio practice. DCU was a founding member of the  eportfolio community of practice Eportfolio Ireland  Furthermore, DCU is represented in the wider eportfolio community globally through DCU board membership on AAEEBL (Association of Authentic, Experiential and Evidence-Based Learning). 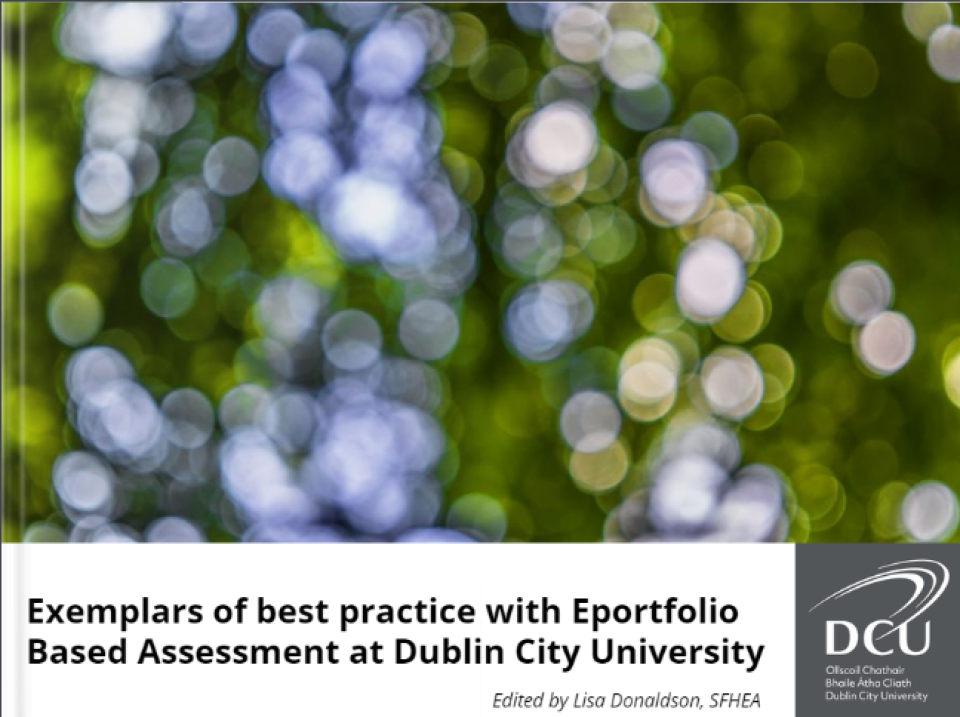 Case studies of eportfolio practice across many disciplines in DCU have been collated in this ebook. Reflections on the design and impact of eportfolio based assessment are shared.

Student feedback has been overwhelmingly positive:

"I feel that Loop reflect was a major strength. Some of the topics covered in class were quite difficult, but by doing Loop reflect you had to read over your notes from class and do some extra research. This helped so much at exam time because you actually understand and remember what you are studying. I think every module should use Loop reflect!"

"I learnt a lot about myself in the process of creating the portfolio. I found that I reflected a lot more on the different elements of my course when I wrote about them on the loop reflect page."

"Creating this e-portfolio gave me the opportunity to pull together all the experiences and learnings from the past year in college and to synthesise my achievements and growth from all areas of the course."

Feedback from lecturers on the affordances offered by eportfolio are equally positive:

"Just to let you know - this module was always assessed with a written exam but I have to say I'm delighted with their submissions in Eportfolio. I intend to use it next year for other modules too."

"I'm really happy I chose Loop Reflect generally, especially with the move to online teaching....I also think as they saw their portfolio pages develop, that they were achieving goals on a more continuous basis and I liked that about the portfolio approach."

"Enjoyed marking my Loop reflect assignments more than ever this year (ie. compared to marking other formats). The portfolios are a joy and help develop real understanding of the students' lifeworlds as they integrated different perspectives."

In line with the National Forum’s strategic priority of professional development for staff, funding was received through Strategic Alignment of Teaching and Learning Enhancement (SATLE) fund for the Confidence & Competence with Eportfolio project running until May 2021. This project focuses on augmenting educators’ skills in use of e-portfolios and the teaching of reflective learning processes across three faculties.

The initiative aims to expand the use of e-portfolios across programme teams . E-portfolios are currently used as repositories for assignments across modules on programmes but the benefits of Loop Reflect, DCU’s e-portfolio platform, are not being fully realised due in part to the limited skills and confidence of the lecturing team.

Reflective learning is increasingly recognised as a critical mechanism through which students connect their learning across modules and contexts; they are better equipped for future challenges and are more likely to learn from failure when they engage in reflection effectively. Reflection is critical in building meaningful links in learning-feedback cycles, particularly in marrying academic with experiential learning.

This project will have two principal outcomes:

1. Development of the skills of key staff across a number of disciplinary areas who will act as learning champions.

2. The champions will establish a reflective learning community aimed at sharing best practice and developing colleagues’ skills in the use of eportfolios and the design of reflective teaching and learning approaches. This will be followed by an evaluation of the effectiveness for students of explicit teaching in reflective learning skills.

Similar to the enhancements that DCU continue to develop with Moodle, DCU has led in the space of improving the underlying Mahara platform. Through conversations, support requests, informal observations, and formal research, DCU identified  areas in the software that would benefit from changes and re-imagining workflows since we launched the platform. Together with the company that maintains Mahara, Catalyst, as development partner, these initiatives were developed and deployed. These changes benefited students, tutors, and non-teaching staff involved in the support of the portfolio platform at the university.

The three changes that were incorporated into Mahara core over the past three years were:

• Automatic copying of templates created in a group into student accounts

All these changes were and still are very well received by the worldwide Mahara community and contributed to improved usability of the platform, allowing students to work with templates more flexibly rather than having a prescribed set of evidence types, and providing organisations more data on the usage of the portfolio site, helping implement better support strategies as an example.  This resulted in DCU being invited to become a formal Mahara Supporter in 2018. 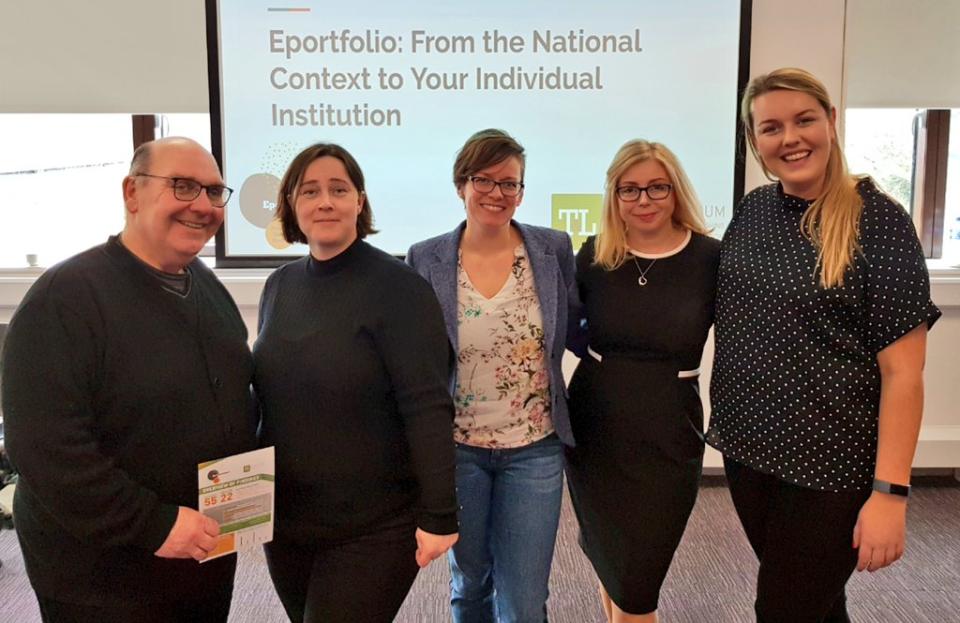 Another example of leadership in the area of ePortfolios is Eportfolio Ireland. This is a professional learning network for eportfolio practitioners and researchers based in Ireland. Established in 2017 as MaharaIrl by Lisa Donaldson of TEU in DCU, it was rebranded Eportfolio Ireland in 2018 to better represent the broader interests of all members. This network supports faculty professional development and ongoing collaboration between eportfolio practitioners in Irish higher education institutions.

Eportfolio Ireland designed and ran the groundbreaking Eportfolio Unconference in 2018 to great acclaim, and in collaboration with group members has developed resources shared back to the wider eportfolio community including the Eportfolio Assessment ebook and eportfolio rubric. More recently, Eportfolio Ireland spearheaded the first national survey of eportfolio practice and showcased initial findings at a National Forum funded seminar in February 2020. This survey is currently being relaunched to assess the impact of the Covid-19 pandemic on eportfolio assessment nationally.

The steering group members of Eportfolio Ireland are serving as guest editors of the Irish Journal of Technology Enhanced Learning,  an open access, peer reviewed journal published by the Irish Learning Technology Association. The journal will publish early in 2021 a special issue exploring issues related to eportfolio in Ireland.

For more information on the Reflect eportfolio initiative, please click here.  The Reflect platform can be accessed  through the Quick Links panel in Loop or via reflect.dcu.ie.