Open to all North Dublin writing groups. Write a short story or poem on any topic. 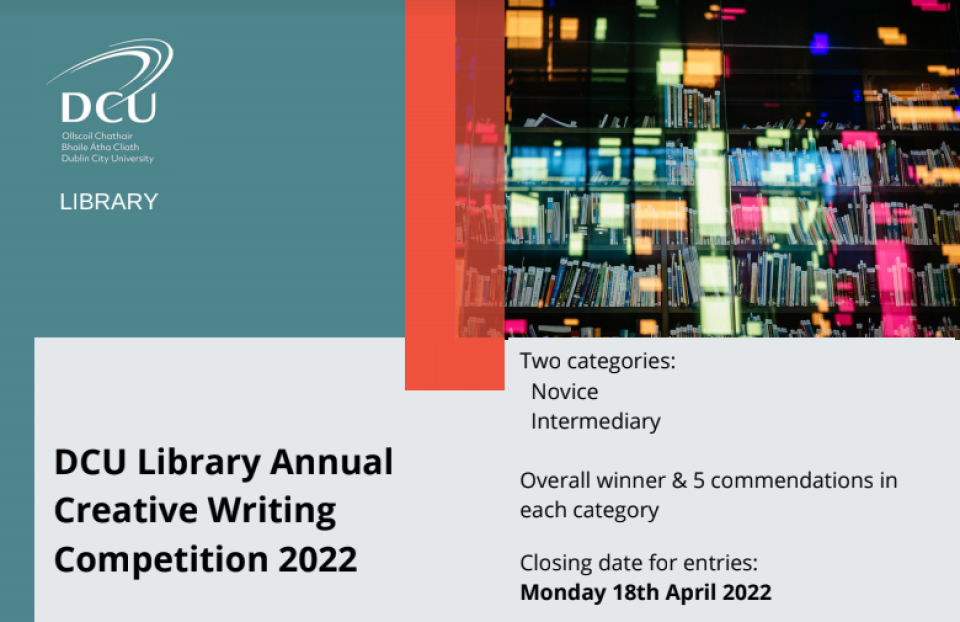 This competition started in 1999 and an Awards Night is held in the library announcing the winner and ten commendations.  Library staff volunteer to participate in the judging and organisation of the competition. The library invites a Guest writer for the Awards Night who gives advice and reads some of their work.

Delighted to be celebrating 21 years of this competition with a anniversary booklet, videos and messages from past participants, guest authors and library staff. 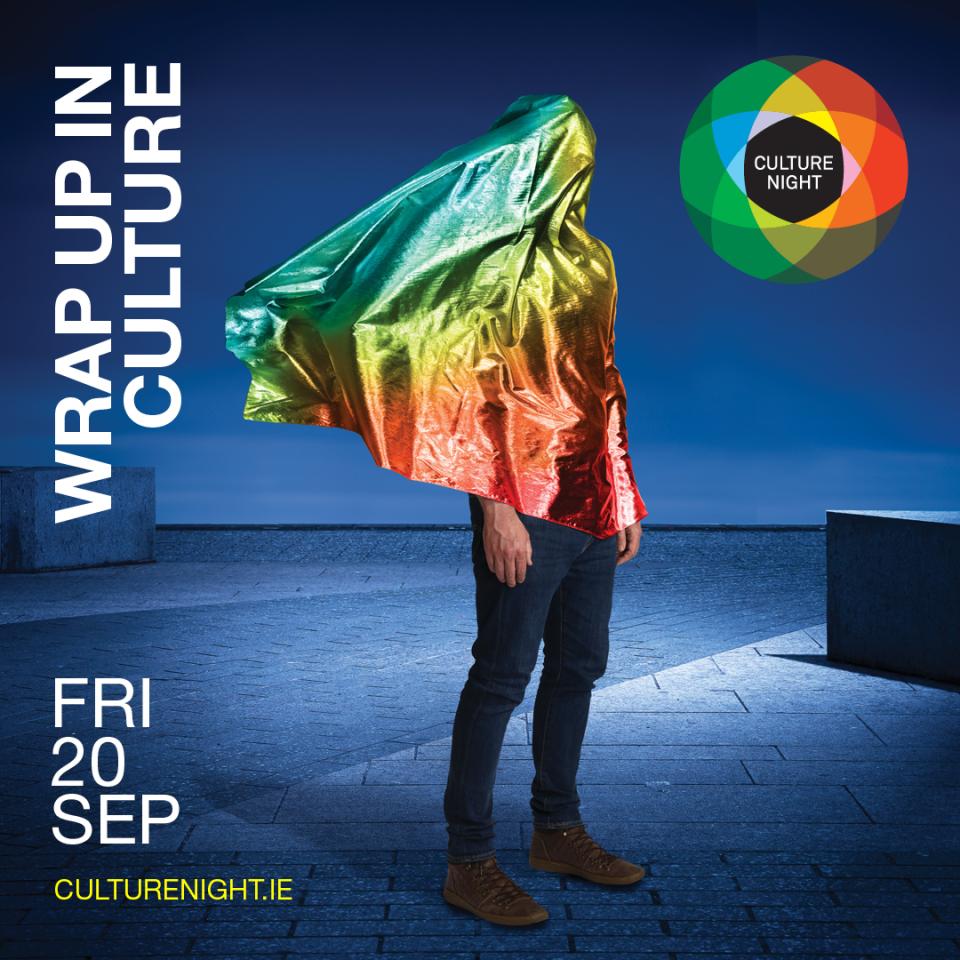 DCU Cregan Library partakes in Culture Night which is an countrywide event. Venues and public spaces across Ireland open their doors to host a programme of free late night entertainmen as part of an all island celebration of arts, heritage and culture.

DCU St Patrick’s Campus opened its doors to the public for Culture Night on Friday 20th September 2019. Locals explored the remarkable and historic campus in the heart of Drumcondra.

An Invitation to our neighbours - click here for programme of events 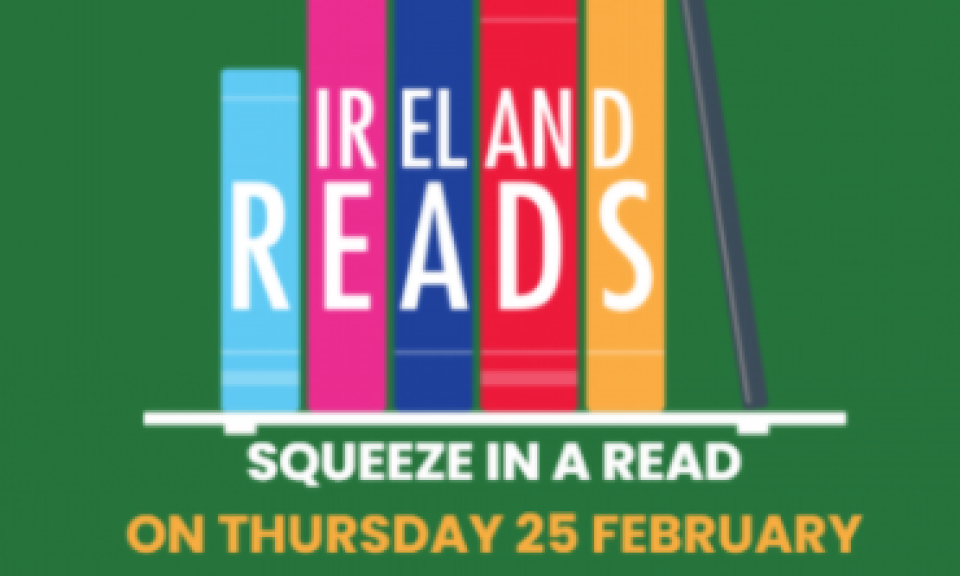 On Thursday 25 February 2021 we’re inviting people of all ages to get reading.

Why? Because taking some time for yourself to relax and do the things you enjoy (like reading) is important to help look after your mental wellbeing.

Get involved, more information on the Ireland reads website.

DCU Library are promoting this Reading Day by asking staff and students to read something they've written of their favourite books or poems online during the day, watch out for this on our social media accounts.

Videos of participants below..

Bizzy Coy, MA in Creative Writing student, with her poem

'How to Move Heavy Furniture By Yourself'

(read at the Creative Writing Awards night in May 2019)

Dr. Kit Fryatt, lecurer in School of English, reading 'To The Harbormaster' by Frank O' Hara.

It's all about books - a visual arts exhibition by Marie Hanlon 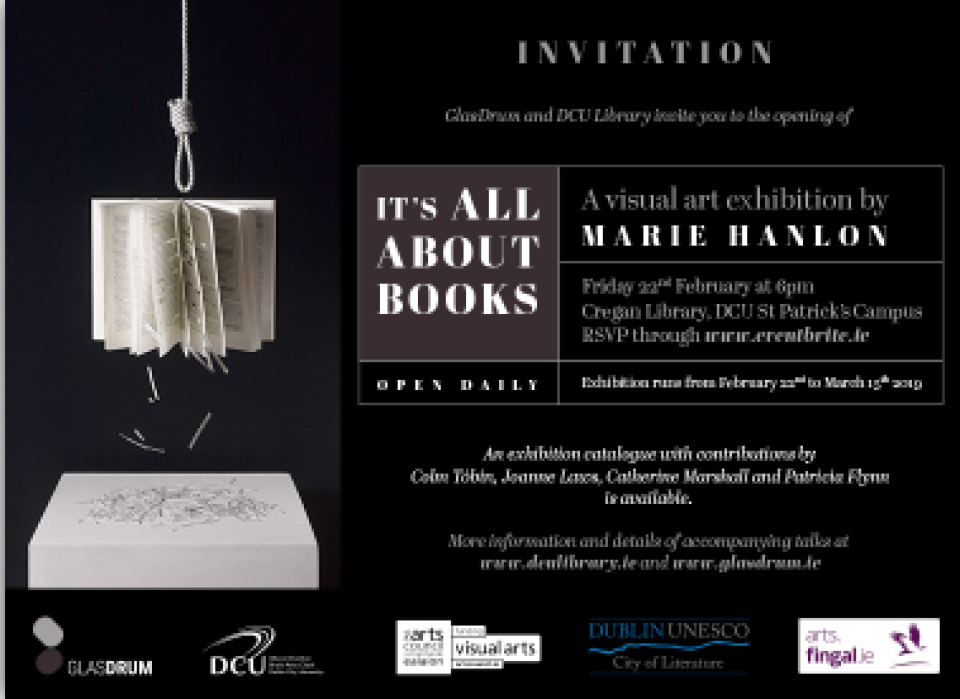 It's all about books - a visual arts exhibition by Marie Hanlon

Set in the wonderful contemporary glass architecture of the DCU Cregan Library, Marie Hanlon's visual art installation is designed to set us thinking about our engagement with books. A catalogue accompanies the exhibition with essays by Colm Tóibín, Joanne Laws, Catherine Marshall and Patricia Flynn.

Three Thursday Talks, 6pm - 7pm, are scheduled to accompany and illuminate the exhibition, featuring a range of fascinating observations and viewpoints. The talks are FREE to attend.

28th February 2019
Marie Hanlon - It's All About Books
Marie discusses the process of exhibition making, asking 'how do ideas become artworks?' In presenting the book as 'object'  her installation It's All About Books draws points of connection between the literary and visual arts.
Marie Hanlon is a Dublin based artist. Her work seeks to transform moments of everyday experience into occasions of deeper consideration. Having worked previously in traditional media, her collaborations with Irish composers broadened her range to include video and installation. It's All About Books at  Cregan Library is an exhibition of 'objects' dealing with how we think about books and the written word. Marie Hanlon has exhibited widely in Ireland and abroad, she is a member of Aosdána and is represented by Rubicon Projects.

07th March 2019
Sharon Murphy - The climate is unusually destructive to Books: India, Libraries, and the Early-Nineteenth Century British Soldier
The East India Company began to establish libraries for soldiers in India from the early 1820s and, from the first, those responsible for the day-to-day operation of the institutions began to express anxiety in relation to the preservation of the books that were within their care. In part, this was a result of environmental factors in India; it was also, though, linked to the peculiar nature of life in the soldiers’ barracks, and a growing realization that the ‘where’ and ‘how’ of soldiers’ reading could (or should) not always be controlled. This paper, then, will explore what the evidence reveals about the book as a material object in early nineteenth-century soldiers’ libraries in India and, in particular, how recognition of the physical nature of the book affected the reading of the men.
Dr. Sharon Murphy is an Assistant Professor in the School of English, Dublin City University. She is the author of The British Soldier and his Libraries, c. 1822-1901 (Palgrave Macmillan, 2016), and of Maria Edgeworth and Romance (Four Courts, 2004). She has also published in essay collections and journals. Dr. Murphy is a graduate of University College Dublin, and of the University of Dublin, Trinity College.The climate is unusually destructive to Books: India, Libraries & Early-Nineteenth Century British Soldier.
Jason McElligott - Exploding Back into Life: The Re-Discovery of Forgotten Books
Every author hopes her book will be well received and widely read. She may even hope that her work will continue to find readers long after her death. But, what happens when a book sits unread and unloved on a shelf for decades or centuries before exploding back into the public consciousness? How does this process of re-discovery function? This talk will look at the strange afterlife of two intriguing texts, the wildly funny Man in the Moon of 1649 and the wildly seditious Killing No Murder of 1657.n McElligott. Jason McElligott is the Director of Marsh's Library, Dublin. Born in Cabra, he was educated at UCD and St John's College, Cambridge. He is currently writing a book about white-collar crime in eighteenth-century Dublin.

14th March 2019
Alan Titley - Lest We Remember: An Poll sa Chuimhne
Readers read hundreds of books, maybe thousands. And yet we retain only a tiny fraction of what we read. Or do we? This talk attempts to grasp at what passes through our minds when we read a book, and what stays there if anything. And if we forget most of what we read, which we do, what is the point of ploughing through any book at all. At all. At all. This bilingual talk will answer all of these pressing questions definitively for all time. Cad a fhanann sa chuimhne tar éis na mblianta fada léitheoireachta agus staidéir? Mistéir de mhistéirí na cruinne é. Má tá eolas an domhain le fáil i leabharlanna an tsaoil, cén fáth a mbíonn daoine chomh hamaideach sin dua a chur orthu féin rudaí a fhoghlaim? Cé mhéid den leabhar a léigh tú an tseachtain seo caite a bhfuil meabhair agat air? Tabharfar aghaidh ar na ceisteanna seo le linn na cainte, agus cá bhfios, b’fhéidir go mbeadh freagra orthu?
Alan Titley is an award-winning novelist, playwright, broadcaster and scholar who writes in Irish and English. He is a member of the Royal Irish Academy and Professor Emeritus of Modern Irish in UCC, and former Head of the Irish Department at St Patrick’s College, DCU. He currently writes a weekly Irish language column with the Irish Times and his latest novel, ‘Lámh, lámh eile’ was published in 2018.
Tanya Lokot - Manuscripts Don't Burn: Censorship, Samizdat and the Curious Life of Mikhail Bulgakov's Master & Margarita
The Russian writer Mikhail Bulgakov was no stranger to state censorship, with many of his works in the 1920s and 1930s banned by Soviet authorities. Bulgakov's most famous novel, Master & Margarita, was published well after his death in the early 1960s – and was still censored. But determined readers devised ingenious ways to make the full text of the book available.
Tanya Lokot is an Assistant Professor at the DCU School of Communications. One aspect of her research focuses on internet freedom and censorship in Ukraine and Russia, as well as media propaganda in conflicts and crises. A former journalist, her writing has appeared in The Guardian and The Moscow Times. Her forthcoming book on digital media and protest in Ukraine and Russia will be published in 2020. 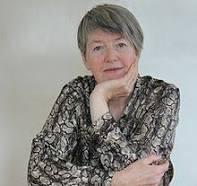 Combining Marie Hanlon’s literary and visual interests, IT'S ALL ABOUT BOOKS is a visual art installation set in the wonderful contemporary glass architecture of the DCU Cregan Library, designed to set us thinking about our engagement with books. Overlooking Dublin city, a place strongly associated with literature, Cregan Library is a fitting venue for Hanlon’s exhibition.

Describing the exhibition in her own words, Marie says "I didn’t think it at the start but when I looked at the works collectively, I realized that they’re all, in some way or other, about ‘seeing’, seeing and understanding”. The artworks relate to the role of the book in our culture: as artefact, object, document, resource, entertainment, concept etc. The pieces engage with the materiality of books, their history and their future in a technology driven world. They explore points of intersection between writer and reader, reader and fellow reader.

At the heart of Marie Hanlon’s exhibition is the interchange between the book and the artwork.  “Ulysses Bolted” refers to the first publication of Ulysses by James Joyce while “Assimilation” features a bespoke shirt printed with text from Joyce’s Dubliners. “Black Book” obliquely references Samuel Beckett’s short story The Calmative, but Laurence Sterne’s The Life and Opinions of Tristram Shandy, is directly referenced through the insertion of a black page in the catalogue with accompanying title “Alas, poor YORICK!”.

”‘The Life and Death of the Author” draws attention to the changed relationship between writer and reader, while works such as “Book of Mirrors" and "Ghost" raise questions about authenticity and the self.

A catalogue accompanies the exhibition with essays by Colm Tóbín, Joanne Laws, Catherine Marshall and Patricia Flynn together with images from the exhibition and is available for sale from the library.

Marie Hanlon was born in Kilkenny, she studied History of European Painting and English at University College Dublin, more recently she completed an MA in Art in the Contemporary World, National College of Art and Design, Dublin. Hanlon has been a professional artist since 1990, and has exhibited as a solo artist, in group shows and in screenings throughout Ireland and abroad.

Marie Hanlon’s work is concerned with ‘making visible’; she seeks to arrest moments of everyday experience which inform the way we live the world but which can be bypassed if not given attention and focus. Through collaboration with contemporary composers in recent years Hanlon has extended her range of media to include moving image and installation. It’s All About Books will mark yet another development through the inclusion of a performance artwork.

Hanlon is a member of Aosdána, the state sponsored body of creative artists in Ireland. She lives and works in Dublin and is represented by Rubicon Projects | Rubicon Gallery. 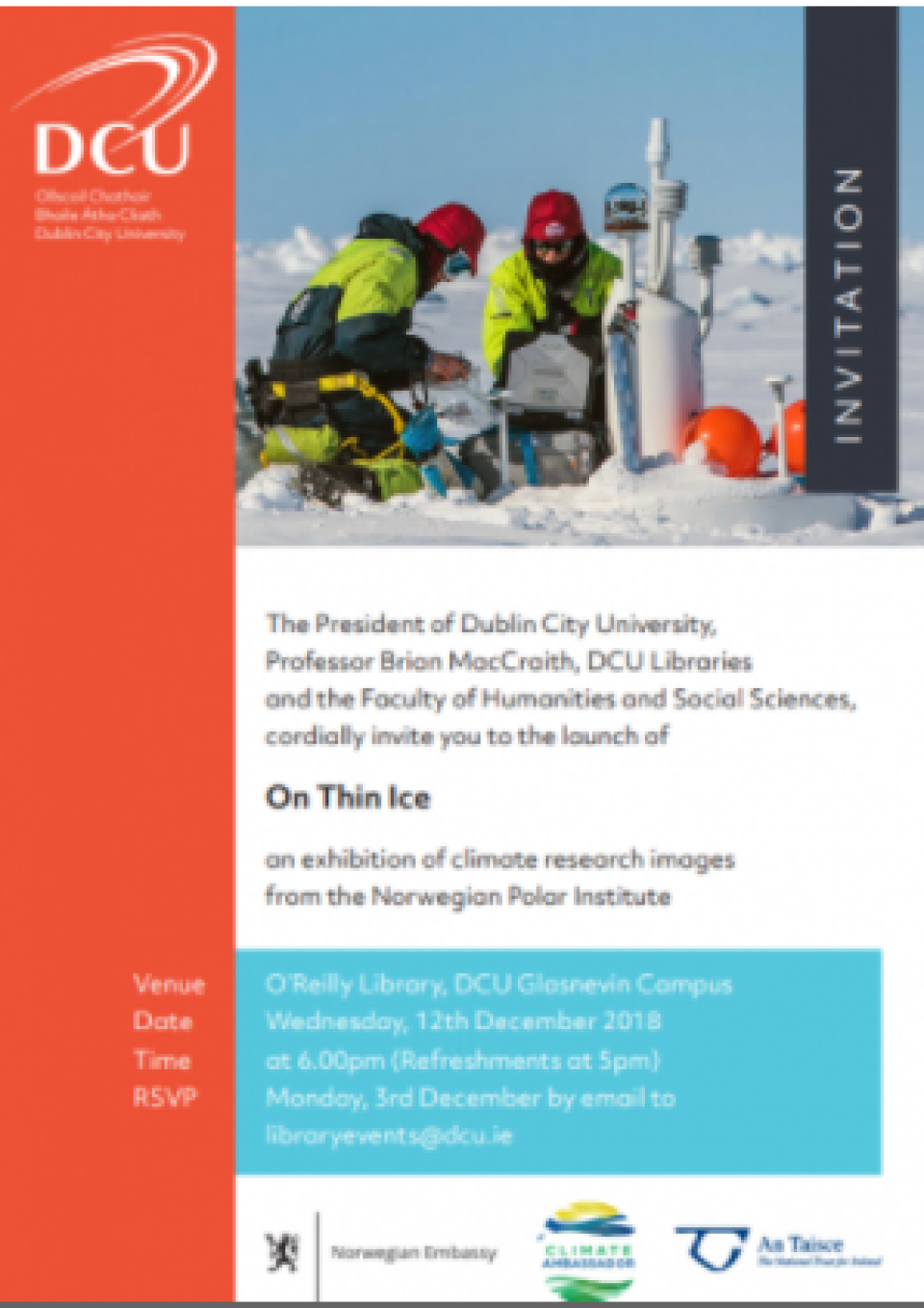 The aim of this series is to provide a forum for all key stakeholders to come together to share and discuss current open scholarship practices, initiatives and strategies. In this, our inaugural conference, we examine the global impact of open scholarship initiatives from local, national and international perspectives.